Be the first to review this product
Adorned with a 12 point stag, this whisky earned a Gold Medal in the 2019 International Wine & Spirits Competition.
$332.99
Add to Wish List

Once the barley has been fermented, the wash is distilled twice, first through Dalmore Distillery's copper-pot wash stills and then again through its copper-pot spirit stills. The wash stills have an unusually flat-top, while the spirit stills are equipped with cold water jackets. This unusual equipment — the water jackets rinse cold water near the top of the still — makes it difficult for the lighter elements of the whisky to pass through the still, and ultimately results in a more opulent and rich whisky.

Dalmore Distillery King Alexander III Single Malt Scotch Whisky takes its name of an act of heroism that occurred in 1263 — during a hunting trip with King Alexander III, a member of Clan MacKenzie saved the King from being attacked by a charging stag. The whisky is matured in six different types of casks: used bourbon casks, marsala barrels, madera drums, French wine barriques, port pipes and sherry butts. As a result of this complex aging process, the whisky has an aroma of oranges, tangerines and dark plums. The initial notes of baking spices, coffee and citrus give way to notes of cherries, cranberries, and oranges and lead to a glorious, ever-lasting finish.

The single malt whisky represents a lush and opulent expression from one of the oldest and most prestigious Scottish distilleries.

Aroma of red berry fruits and a hint of passion fruit. Critrus zest, vanilla, caramel and almonds on the palate, followed by a cinnamon finish with a hint of ginger and nutmeg. 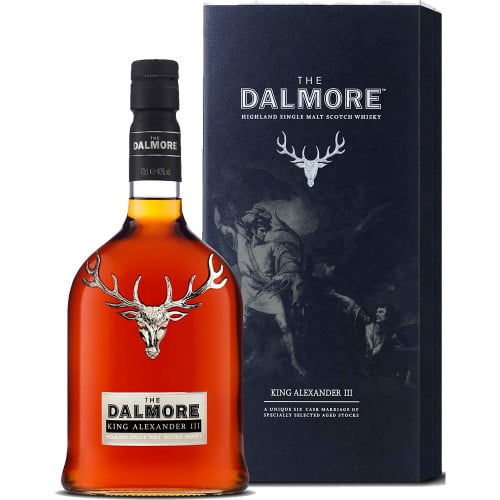