Size750mL Proof92.4 (46.2% ABV)
The 3rd release in Ardbeg's celebrated annual series, this was the first Ardbeg to be bottled during lockdown. Matured in American oak and Oloroso sherry casks, the expression is spicier and even better-balanced than its predecessors. 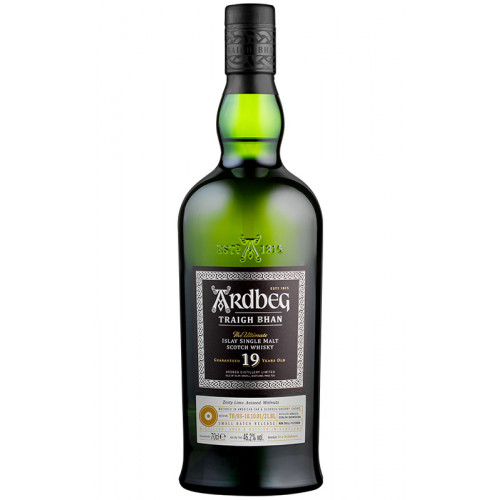 The Traigh Bhan (pronounced "tri-van") is named after a local beach and translates to "the Singing Sands". Each year's release has subtle changes in its batch recipe, as well as minor changes in the selection of casks. This is the third release and the boldest one yet. "Batch 3 is an extraordinary dram. Different from its predecessors in far more than just taste, this 19 year old is a first for Ardbeg and a collector's dream," said Dr. Bill Lumsden, Head of Distilling & Whisky Creation. Matured in American oak and Oloroso sherry casks, it's a spicier, more fragrant, and expertly balanced single malt that's bottled at 92.4 proof.

Grab your bottle of this delicious whisky today!

The nose has smoke, sea spray, and pine resin with aromas of toffee, aniseed, blossoms, citrus zest, and cayenne pepper. The palate is rich and sweet with prominent smoke, treacle toffee, aniseed, and smoked brown sugar. There are hints of nuts that linger through the smoky and spicy finish.