Size750mL Proof92 (46% ABV)
Creamy, fruity, and full-bodied, this blended Scotch whisky is the first in this year's lineup of Compass Box's 20th-anniversary expressions. It consists of whiskies from Miltonduff, Clynelish, and Glen Elgin distilleries, as well as grain whisky from North British Distillery.
Notify me when this product is back in stock. 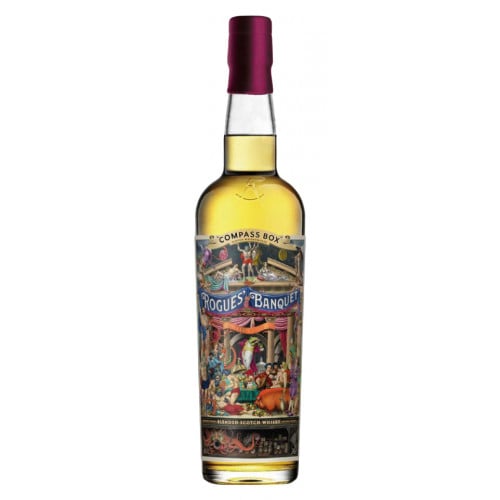 Compass Box is a unique blend of grain Scotch whisky. Nearly a century ago, grain whiskies were common across Europe, but were overtaken in terms of popularity when the larger distilleries in Scotland began focusing on single malt whisky. "When good Scotch grain whisky is aged in good quality American oak casks, the results can be stunning," says Glaser. They are strong advocates for quality cask selection. They use only whiskies in their blends that are aged in first-fill American oak casks which tend to yield more vanilla character, richness and sweetness than the traditionally used casks in Scotch maturation. They also use a high malt content, differentiating themselves from most Scotch whisky producers.

Their limited edition range is based on rare whiskies and allows them to constantly be creative. Rogues' Banquet is a blended Scotch whisky that is the first expression to come as a celebration of their 20th anniversary. It has been crafted from malt whiskies from Miltonduff, Clynelish, and Glen Elgin distilleries, as well as grain whisky from North British Distillery. It was bottled at 92 proof with no chill filtering or artificial coloring. This release is limited to a total of 5,267 bottles.

The whisky is full-bodied with a fruity and creamy profile. There's tropical fruit such as papaya, apricots, ginger, and toffee on the nose. The palate is fruity as well as nutty. Finishes long with notes of honey, ginger, and nuts.