Learn more
Size750mL Proof86 (43% ABV) *Please note that the ABV of this bottle may vary
This 18-year-old single malt is one of the most brilliant whiskies in the Glen Grant lineup. Named Scotch Whisky of the Year, in Jim Murray’s 2017 Whisky Bible. 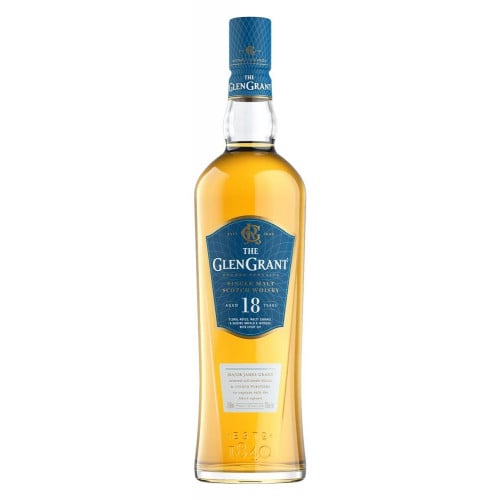 Situated along the banks of the River Spey, the Glen Grant Distillery was founded in 1840 by John and James Grant, who had previously been employed at the Aberlour Distillery. Glen Grant's unique location — it enjoyed access to fresh water from the river, a steady supply of barley from the surrounding farmland and access to transportation from the nearby port of Garmouth — allowed it to prosper quickly. By 1872, however, both John and James Grant had passed away, and James Grant Jr. — James' son and John's nephew — inherited the distillery. The younger Grant, known simply as "the Major," quickly proved himself a worthy successor.

The Major was a legendary inventor, womanizer, and traveler — he was the first person in the Scottish Highlands to own a car, and his distillery was the first in Scotland to enjoy electricity. Also, the Major designed and equipped Glen Grant distillery with the tall, slender stills and purifiers that allowed Glen Grant to produce a whisky that was noticeably lighter and more delicate as compared to its Scottish brethren.

Glen Grant Single Malt Scotch Whisky is made from crisp, Scottish barley, much of it still harvested from the same Morayshire fields that John and James Grant used nearly two centuries ago. Once the barley has been malted and mashed, it is fermented in washbacks made of Oregon Pine. While wooden washbacks are more expensive and difficult to maintain as compared to stainless steel washbacks, they absorb more heat generated during the fermentation process and thus, create a lighter and richer whisky.

Following fermentation, the wash is twice distilled, first through Glen Grant's copper-pot wash still and then again through its spirit still. Each still is equipped with a purifier, which acts as a small condenser and causes a portion of the evaporating vapors to be pumped back into the pot and then re-distilled. This purification process — Glen Grant in the only distillery in Scotland to use purifiers in both distillations — results in whisky that has a signature fresh and malty flavor.

This is a single malt of unparalleled quality. Matured for at least 18 years in some of the highest quality hand-selected oak casks, yields a spirit with a radiant golden color, and compelling floral and oaky aromas. This whisky is deeply complex, with rich and vibrant elements, and intricately nuanced flavors of malted caramel, vanilla, and raisins followed by a long, sweet, and bold spicy finish.

Rich and floral aromas with oaky overtones and hints of baking spices on the nose. On the palate is malty caramel, delicate, dried raisins and vanilla. The finish is long and sweet with hints of nuts and spice.