Size750mL Proof90 (45% ABV)
Aged for a minimum of five years, this whisky earned a score of 94 points from Wine Enthusiast. 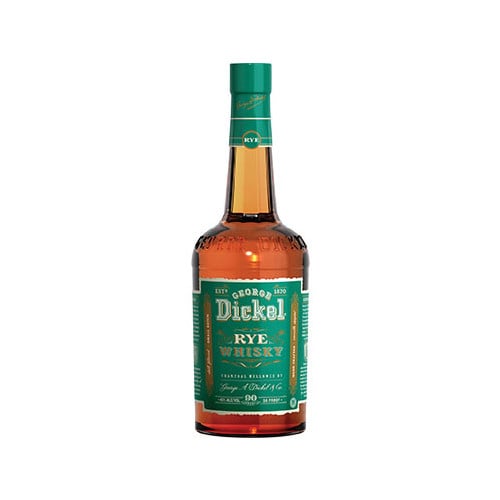 George Dickel Rye Whisky is made from a mash of 95% rye and 5% malted barley, which are milled and mashed before being fermented with a proprietary strain of yeast. Following fermentation, the whisky is distilled and matured for a minimum of five years in casks that have been charred with a #2 char on the heads and a #4 char on the staves (the degree of charring within a cask is measured on a scale of one to four, with a #1 char referring to casks that have been lightly toasted, and a #4 char referring to casks that have been charred so heavily that the interior resembles an alligator hide). Once the whisky has matured, it is chilled to 40°F and then mellowed through sugar maple charcoal. This process is rather unusual (most distilleries that mellow whisky through charcoal do so prior to maturing it in oak barrels) and contributes a hint of smoke and spice to the whisky.

George Dickel Rye Whisky has an aroma of oak, spicy rye, citrus and pineapple that gives way to notes of cherries, caramel, cinnamon, maple syrup and vanilla spice on the palate. The finish is gentle and complex, with hints of roasted nuts, fennel and cardamom that reveal undertones of spicy dough, smoke and ginger.

The whisky earned the Gold Medal at the San Francisco World Spirits Competition in 2013, and a score of 94 points from Wine Enthusiast. Pick up a bottle today!

Aroma of oak, spicy rye, citrus and pineapple that gives way to notes of cherries, caramel, cinnamon, maple syrup and vanilla spice on the palate. Finish is gentle and complex, with hints of roasted nuts, fennel and cardamom that reveal undertones of spicy dough, smoke and ginger.