Size200 mL Proof65.4 (32.7% ABV)
From the Fluid Dynamics range of barrel aged cocktails, this richly decadent Rye Manhattan is “maybe the best drink you ever had.” —Craft Distillers
Notify me when this product is back in stock. 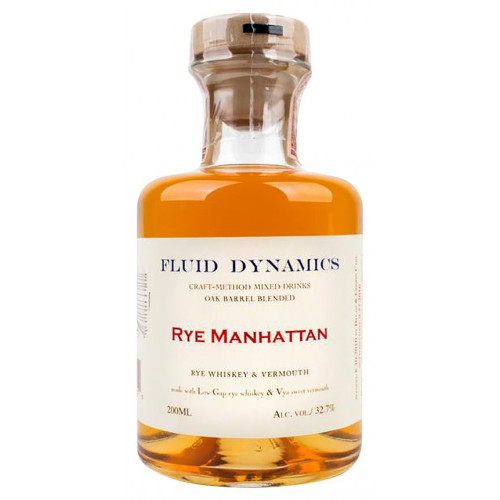 Master distiller Crispin Cain is a seasoned wine industry veteran. In 1983 he was moonlighting jobs in Pleasanton in a wine cellar, and on a bottling line, while working with Cooper Laboratories plasma kinetics division, during the day.

Cain has proved to be quite the wizard on the still, known for delivering award-winning spirits, Cain has been working with spirits for many many years. His son, Devin Cain, is also a spirits maven, having apprenticed under his father his blending skills are quite exquisite.

The Fluid Dynamics range is comprised of barrel-aged cocktails made from craft-method spirits. This barrel aged Manhattan Rye is produced at Cain’s Tamar Distillery, and distributed by Craft Distillers. Master blenders and distillers are essentially alchemists, who inhabit a deep understanding of the spirits they produce, from the flavors and aromas, to how the liquid interacts with the barrel. Fluid dynamics recipes involve a lot of experimentation with blends and take several months to develop.

Crafted from whiskey distilled through an antique cognac still, and rested for six weeks, Rye Manhattan is a richly decadent mix of Low Gap’s award-winning Rye whiskey and Andy Quady’s Vya sweet vermouth. Drink it straight or add just a dash of your own bitters for a more customized libation.

A subtle spice on the nose and a honeyed complexity on the palate, with barely a trace of alcohol, the bold rye is strikingly subtle as it plays off of the vermouth, both elements complement each other to create a truly balanced smooth drink.