$119.99
Caskers Rewards members earn up to 5 store points back when buying this bottle.

Size750mL Proof80 (40% ABV)
In honor of the House Baratheon of Westeros this Royal Lochnagar’s 12-Year-Old single malt is a regal balance of fruits and spices.
Notify me when this product is back in stock. 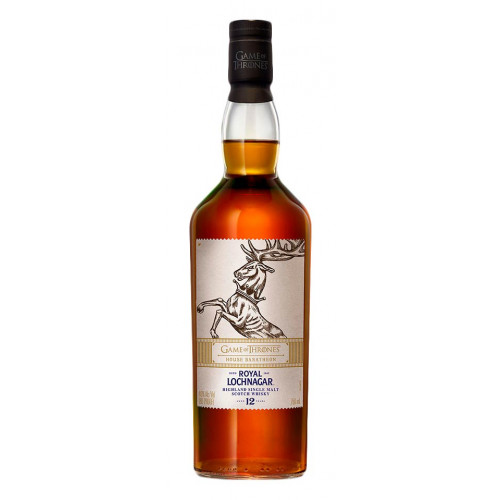 The final season of HBO’s hit fantasy series has arrived and with it a series of Scotch whisky bottlings inspired by the many Houses of Westeros. Made by various distilleries under the Diageo umbrella, these eight single malts were chosen to commemorate the final season of one of the greatest shows in TV history.

In honor of the seven Houses of Westeros and the legendary Night’s Watch, this collection delivers rich flavors and brilliant illustrations sure to captivate true Game of Thrones fans. Crafted from 100% malted Scottish barley using unique production techniques, these single malts are aged in a variety of oak casks.

Hailing from the Highlands, House Baratheon is represented by Royal Lochnagar’s 12-Year-Old single malt, a regal balance of fruits and spices. Situated near Balmoral Castle, at the foot of the Cairngorn mountains, and the pure waters of the Scarnock springs sits the distillery. After Queen Victoria and Prince Albert took the first-ever distillery tour in 1848, the Royal Lochnagar single malt became known by royals around the globe as a delicate Highland malt with notes of light toffee.

Subtle aromas of oak and candied spice on the nose. The palate is a harmonious abundance of fruit and spice enhanced by creamy flavors of vanilla, coffee and a touch of baking spice. The finish is elegant with a subtle nutmeg, dessert note.