Size750mL Proof92 (46% ABV)
Distilled with Chariot barley from their farm in 2006, this expression was then aged for a dozen years in ex-bourbon barrels before being bottled at 92 proof. Limited to 1,680 bottles, it's bound to be as collectible as their previous releases.
Notify me when this product is back in stock. 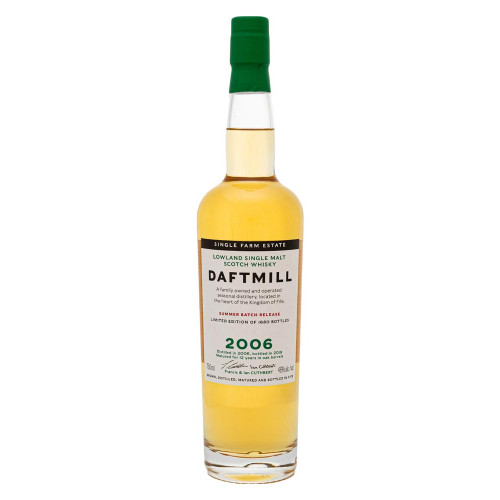 Situated in the Howe of Fife, a valley in Scotland, Daftmill is a family farm that mainly grows cereals and potatoes and rears cattle. It is named after a local stream, called "The Daft Burn", which plays a trick on the eye when viewed from a certain point, making it seem as if the river is running uphill. The farm has been operational for 6 generations but it wasn't until more recently that brothers Ian and Francis Cuthbert ― whisky lovers and perfectionists ― finally opened the doors of the distillery that was long in coming.

Their own malted barley was on hand, so was an artesian spring, and an old mill building was converted into a distillery in 2004 and 2005. All the labor and equipment ― apart from their stills from Forsyths in Rothes ― came from local craftsmen. It was on November 30, 2005 that they received their license at last. The first whisky was distilled 2 weeks later. Then came the waiting game, as they expected that their spirits would not reach the market before they have aged for at least a decade. Indeed, they began releasing the whisky in 2018 at 12 years of age.

Using their own farm-grown barley and artesian-well water they craft fine Lowlands whisky with minimal waste where all the magic happens within a 5-mile radius of the farm. Daftmill is a farm first and distillery second, as the latter only operates during midsummer and winter, during the farm's quiet periods ― a practice that used to be the norm in Scotland, but has become extremely uncommon in the past century. This means that all their spirits come in super-limited quantities.

Daftmill 2006 Summer Batch Release is a Lowland single malt that was distilled in 2006, matured for 12 years in oak barrels (Daftmill mostly uses American ex-bourbon casks from the Heaven Hill Distillery), then bottled in 2019 at 92 proof. Their past releases have proved to be highly collectible and this one is bound to continue the trend with a total of 1,680 bottles available from the 7 different casks in total.

Grab one of these limited-quantity bottles today!

The nose opens with freshly-baked cake, toffee, a hint of peaches, and gorse flowers. There's lemon zest on the palate along with honey on toast, marmalade, vanilla, and marzipan. Finishes with lingering honey, spicy oak, fruit, and a nuttiness.