$1,665.99
Caskers Rewards members earn up to 83 store points back when buying this bottle.

Size6750mL ProofVarious ABV
This incredible set of Game of Thrones inspired Scotch whiskies commemorates the smash-hit series Game of Thrones, inspired by the many Houses of Westeros.
Notify me when this product is back in stock.

Caskers Rewards Caskers Rewards members earn up to 83 store points back when buying this bottle. Learn more
Out of stock
Skip to the end of the images gallery 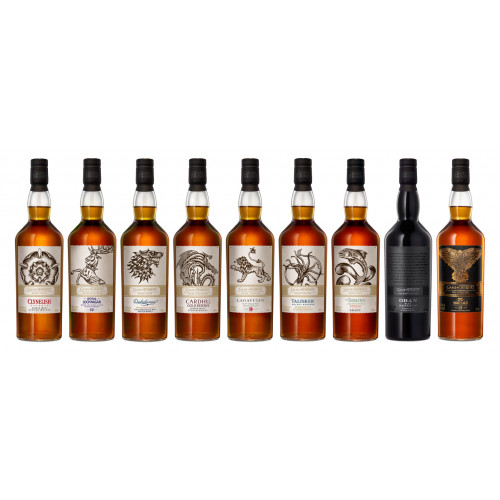 Made by various distilleries under the Diageo umbrella, these eight single malts were chosen to commemorate the final season of one of the greatest shows in TV history.

Inspired by the many houses of Westeros, this collection delivers rich flavors and brilliant illustrations sure to captivate true Game of Thrones fans. Crafted from 100% malted Scottish barley using unique production techniques these single malts are aged in a variety of oak casks.

Clynelish distillery’s landscape echoes the geography of House Tyrell’s green and fertile HighGarden home in the land of Westeros. This single malt has an underlying, complex combination of Highland and maritime notes, complemented by bursts of fresh tropical fruits that give way to a smooth vanilla character.

Representing House Greyjoy is a Talisker single malt truly fitting for House Greyjoy. This whisky is distilled on the shores of the Isle of Skye, one of the most remote and rugged areas of Scotland. House Baratheon is represented by Royal Lochnagar’s 12-Year-Old single malt, a regal balance of fruits and spices.

Representing House Lannister, Lagavulin is the embodiment of the meticulous calculation and tenacity employed by the Lannister’s in their rise to conquer the Iron Throne. This Lagavulin 9 year is a roaring single malt that recalls the Lannisters' riches and is best served neat or with a single drop of water.

The Night’s Watch: Oban The Oban distillery sits beneath the steep cliff that overlooks the bay in the frontier between the western Highlands and the Islands of Scotland, just as Castle Black — home of The Night’s Watch — sits between Westeros and the lands beyond The Wall.

Mortlach Single Malt Scotch Whisky “Six Kingdoms,” is the ninth and final bottling to join the Game of Thrones-inspired range. This 15-year-old Mortlach single malt whisky is inspired by the King of the North Bran Stark, who served as the Three-Eyed Raven, delivering a fruity character with bold, smooth notes of vanilla and spice. Best served neat, over ice or with a dash of water, which develops the fresh fruit character.

This rare limited edition collection is perfect for Scotch lovers and Game of Thrones fans alike. Prepare yourself for the final battle for the fate of the Seven Kingdoms with this incredible set of Game of Thrones inspired Scotch whiskies.

Clynelish Reserve: An underlying, complex combination of Highland and maritime notes, complemented by bursts of fresh tropical fruits that give way to a smooth vanilla character.

Royal Lochnagar 12 Year Old: Subtle aromas of oak and candied spice on the nose. The palate is a harmonious abundance of fruit and spice enhanced by creamy v flavors of vanilla, coffee and a touch of baking spice. The finish is elegant with a subtle nutmeg, dessert note.

Cardhu Gold Reserve: Notes of baked apple and spice on the nose, the palate has rich caramel notes with subtle apple, clove and a hint of nuttiness. The finish is dry and light with a sweet caramel finish.

Lagavulin 9 Year Old: Sweet smoke on the nose with a whiff of sea breeze. The palate is smoky with notes of caramelized banana, smooth vanilla and charred marshmallow. The finish is dry and light with subtle salted caramel.

Talisker Select Reserve: Dry Sichuan pepper smoke and dark chocolate aromas on the nose. The palate has a distinctive maritime quality enhanced by caramel notes, spice, smoke, and fruit. The finish is lingering and complex with a leathery character.

The Singleton of Glendullan Select: Spice and rich and creamy aromas of sandalwood and fruit on the nose. The palate is sweet with spice, fruits and deep notes of violets and orange peel. The finish is intense, warm and dry with an aromatic aftertaste.

Oban Bay Reserve: Deep, rich notes of cherry pie and candied citrus peel blossom on the palate, drifting into a wonderful crème caramel with just a hint of charred oak.

Mortlach: Rich nose, with notes of dried fruits, figs and citrus. Initial flavor of citrus and dried fruits, along with caramelized apples, pears, brown sugar and pie crust. Full-bodied and rich, this whisky finishes with a hint of pepper and biscotti.