Size750mL Proof94 (47% ABV)
Aged approximately twelve years, this bourbon was called the "Best Bourbon Aged 10-12 Years" by Jim Murray's Whisky Bible.
Notify me when this product is back in stock. 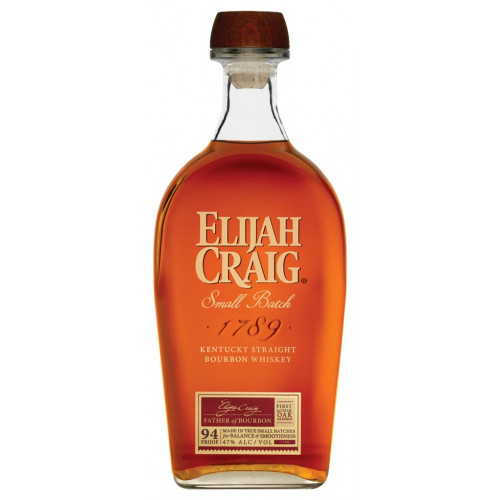 Elijah Craig Small Batch Kentucky Straight Bourbon Whiskey pays homage to Craig and his unique legacy. The bourbon is bottled from the marriage of fewer than 100 casks of maturing bourbon, each of which is rested in a Kentucky rickhouse for a minimum of a dozen years. The bourbon has an aroma of honey, sweet corn, vanilla and brown sugar. The aroma gives way to notes of roasted nuts, creamy vanilla, molasses and tropical fruits on the palate, that are well-balanced by hints of dry oak and cinnamon. The finish is long and sweet, and ends with a warming touch.

Elijah Craig Small Batch Bourbon earned a score of 95 points from Wine Enthusiast, which called the bourbon "mellow" and said that it had the flavor profile of "butterscotch candy." In addition, Jim Murray, author of the Whisky Bible, named the bourbon the "Best Bourbon Aged 10-12 Years," and stated that it is "one of my favorite five or six bourbons" in the world. Elijah Craig Small Batch Bourbon also earned the Double Gold Medal at the San Francisco World Spirits Competition and the WSWA Tasting Competition.

Pick up a bottle of the best bourbon today!

Aroma of honey, sweet corn, vanilla and brown sugar. Notes of roasted nuts, creamy vanilla, molasses and tropical fruits on the palate, that are well-balanced by hints of dry oak and cinnamon. Finish is long and sweet, and ends with a warming touch!