Learn more
Size750mL Proof90 (45% ABV) *Please note that the ABV of this bottle may vary
Aged for 21 years, this bourbon was named one of the four bourbons to try this fall by Whisky Advocate. 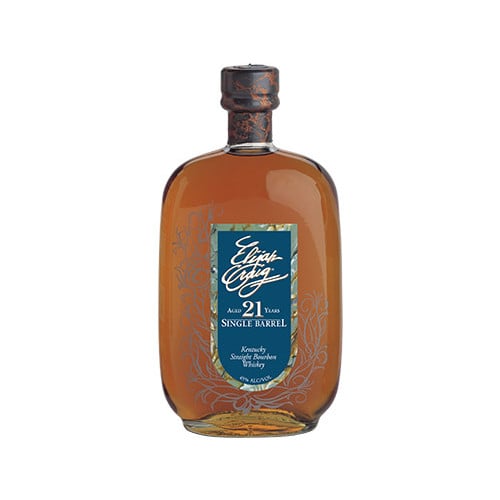 Following the defeat of the British at the Battle of Yorktown during the American Revolutionary War, the territory west of the Appalachian mountains became known as Kentucky County. At the time, the territory was considered part of Virginia, and was overseen by a military governor named John J. Bowman. In order to encourage westward expansion, Virginia issued pioneers who agreed to settle in Kentucky County "corn writs,"which granted the pioneers 60 acres of land if they agreed to settle in Kentucky and start farming corn.

Elijah Craig Limited Edition 21 Year Old Single Barrel Kentucky Straight Bourbon Whiskey pays homage to Craig's unique legacy. "A number of years ago, we carefully identified several hundred barrels in our best rickhouses," says 7th generation master distiller Craig Beam, "and these are the source for this very special 21-Year-Old and for future Elijah Craig Single Barrel editions. These are some of the best older barrels of traditional rye-based bourbon we have in our inventory."

Elijah Craig 21 Year Old Bourbon has an aroma of buttered bread, oak and caramel. The bourbon is full-bodied, with notes of cinnamon, crème brÃ»lée, roasted corn, candied walnuts and buttered popcorn that lead to a tangy finish accented by touches of caramel, vanilla and orange. The bourbon was named one of the four bourbons to try this fall by Whisky Advocate, and makes a great gift during the holidays!

"With the success we have had with the Elijah Craig 20-Year-Old Single Barrel, and the 18-Year-Old before that, we are really looking forward to the release of this new 21-Year-Old bottling," say Beam.

Aroma of buttered bread, oak and caramel. Full-bodied, with notes of cinnamon, crème brÃ»lée, roasted corn, candied walnuts and buttered popcorn that lead to a tangy finish accented by touches of caramel, vanilla and orange.