Size750mL Proof80 (40% ABV)
Aged for up to 12 years, this rum earned a score of 96 points at the Ultimate Spirits Challenge in 2014, which named it the Best Rum in the World.
Notify me when this product is back in stock. 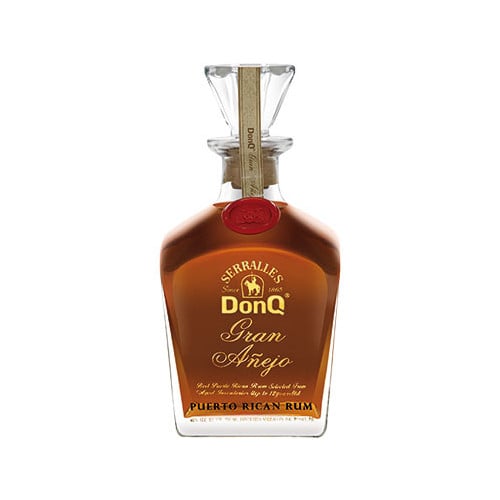 In 1820, Don Juan Sebastian Serrallés emigrated from Spain and arrived in the city of Ponce, Puerto Rico. After living frugally and saving carefully for many years, Serrallés began a small family in the city. Four decades later, his son founded Hacienda Teresa — a sugar plantation — just outside the city borders. Situated in southern part of Puerto Rico, Hacienda Teresa enjoys generous amounts of sunlight and large flatlands, making it ideal for the cultivation of fresh, juicy sugarcane. In 1865, the Serrallés family began distilling the excess sugar cane harvested from Hacienda Teresa into rum. Today, Felix J. Serrallés, Jr. — a third generation master distiller — continues to shepherd his family legacy forward.

Don Q Gran Añejo Rum is made from freshly harvested sugar cane, which is crushed before being fermented using a proprietary strain of yeast (the Serrallés family has been using the same strain of yeast for over 75 years). Following fermentation, the rum is distilled five times before being matured in American white oak casks. "The interaction of wood and rum matures and mellows the spirit, as well as endows our Gran Añejo with a luxurious golden color," says Serrallés. "Our Gran Añejo contains rums aged between 3 and 12 years, creating a balance between sweet and dry that you won't get in other spirits." Once the rums have been aged and blended together, Don Q Gran Añejo Rum is brought to proof with water from the Río Inabón (in 1898, the family was granted exclusive rights to use water from the river for their rum). The Inabón River travels through Puerto Rico's volcanic mountains and as a result, contributes a slightly earthy and mineral flavor profile to the rum.

Don Q Gran Añejo Rum has an aroma of caramelized oranges, citrus zest and herbal vegetables. The aroma gives way to notes of tropical fruits, caramel and vanilla on the palate, and finishes with hints of salty minerals, molasses and coconuts.

The rum has won numerous awards, including the Double Gold Medal at the Beverly Hills Competition in 2013 (where it was named "Best in Show"), the Five Star Diamond Award from the American Academy of Hospitality Sciences and the Platinum Medal at the 2013 Sip Competition. In addition, it earned a score of 96 points at the Ultimate Spirits Challenge in 2014, which named it the Best Rum in the World.

Aroma of caramelized oranges, citrus zest and herbal vegetables. Notes of tropical fruits, caramel and vanilla on the palate. Finishes with hints of salty minerals, molasses and coconuts.