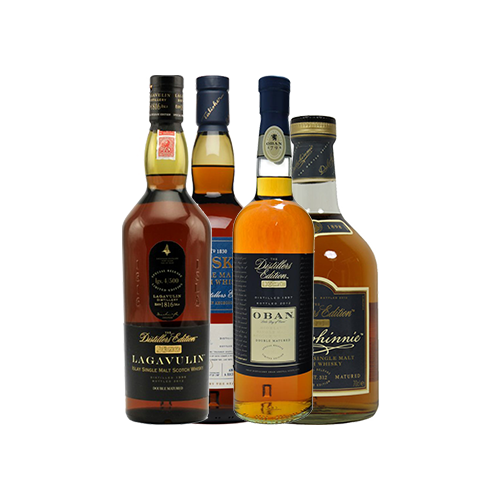 Lagavulin Single Malt Scotch Whisky is known as one of the most intense, smoky single malt whiskies ever made — the peated barley used to create Lagavulin Single Malt has up to twenty times as much exposure to peat smoke than typical Scotches. After the grains used to make Lagavulin whisky are malted at nearly Port Ellen, they are milled and mashed before being fermented for approximately 72 hours.

Following distillation, Lagavulin Distiller's Edition Single Malt Scotch Whisky is aged for 16 years in the distillery's warehouses. During that time, Iain McArthur, Lagavulin warehouseman, ensures that the whisky matures evenly and consistently (McArthur has been working at the distillery for over four decades). After the whisky has matured for 16 years, it is double-barreled, or finished, in casks that were previously used to mature sherry made from Pedro Ximinez grapes. Once harvested, Pedro Ximinez grapes shrivel up to a raisin-like state, which concentrates the sugars in the grape and results in a sweet wine with legendary viscosity and intensity. This double-maturation process complements the intensely smoky notes of the whisky and adds an additional layer of complexity.

Lagavulin Distiller's Edition Single Malt Scotch has an aroma of brown sugar, roasted almonds, cinnamon and spicy cloves. The initial notes are surprisingly sweet, with subtle hints of citrus and toffee which give way to notes of nutmeg and cherries. The ever-lasting finish has deep, dark notes of smoky spices and lingers with just a touch of sweetness.

After moving with their widowed mother to the small port city of Oban, John and Hugh Stevenson began building and repairing boats — a trade they had learned from their father — at the Oban shipyards. In the 1790s, the brothers left their jobs at the shipyard and founded a brewery in the city. In 1794, they converted their brewery into Oban Distillery, one of the oldest and most prestigious distilleries in Scotland.

Following distillation, Oban Distiller's Edition Single Malt Whisky is aged for 14 years in oak casks. During this beauty rest, the whisky is touched by its environment and geography — the warm, salty Gulf Stream and mild, temperate climate of Oban are reflected in the whisky. After its initial maturation, the whisky is double-barreled, or finished, in ex-Montilla Fino sherry casks. The sherry casks add notes of dried fruits, particularly cherries and strawberries, to the whisky, and complement its notes of light, peaty smoke.

Oban Distiller's Edition Single Malt Whisky has a fruity nose, with hints of grapes, citrus and a touch of smoke. The flavor is full and rich, with complex notes of tangy salt, butterscotch, caramel and toffee, which ultimately lead to a lingering, smoky and sweet finish. Oban is situated at the frontier between the Western Highlands and Islay of Scotland — the whisky has the lighter, sweeter notes of Scotland's Highlands region, while still possessing the dry, smoky style of Islay.

Talisker Single Malt Whisky is made from malted barley sourced from the Muir of Ord, a village in Highland, Scotland. The barley is lightly peated to approximately 18 phenol parts per million, which contributes a slightly smoky flavor profile to the whisky. Once the barley has been malted and peated, it is mashed using soft water drawn from one of the 14 underground springs that rise from Hawk Hill — Talisker has been using the same water source since it was founded nearly two centuries ago. "I'm restless at heart so you'll find me poking my nose into the mash tun at all hours," says Mark Lochhead, the distillery's manager. After the barley has been mashed, it is fermented in the distillery's wooden washbacks before being twice distilled through Talisker's copper-pot stills. The stills are equipped with swan-shaped lye pipes and worm tubs, which gives Talisker whisky its signature, full-bodied flavor profile.

Talisker Distiller's Edition Single Malt Whisky earned a score of 96-100 points from Wine Enthusiast, which rated it a "Best Buy."

Situated along the Grampian Mountains in the Highlands region of Scotland, Dalwhinnie Distillery was founded in 1897 by John Grant, and was originally named Strathspey Distillery. In 1898, Grant declared bankruptcy and sold the distillery to AP Blyth, who renamed the distillery Dalwhinnie. The name, which roughly translates to "meeting place"in ancient Gaelic, is a reference to the cattle farmers who would pause at the distillery on their journey south to the cattle markets in Crieff and Falkirk.

Dalwhinnie Single Malt Scotch Whisky is made exclusively from freshly harvested, plump barley, which is milled and mashed with water sourced from Lochan an Doire Uaine (meaning "Loch of the Green Thicket"). The pure spring water, which travels through local peat before reaching the loch (the loch itself is situated 2,000 feet above sea level), imparts a soft yet subtle complexity to the whisky. Since no other distillery may legally use water drawn from Lochan an Doire Uaine, no other distillery is able to replicate the unique, malty-sweet taste of Dalwhinnie Single Malt Scotch Whisky.

Dalwhinnie Distiller's Edition Highland Single Malt Scotch Whisky was distilled in 1996 and matured for approximately 15 years in oak casks. After its initial maturation, the whisky was double-barreled, or finished, for an additional year in casks that were formerly used to mature Oloroso sherry, before it was finally bottled in 2012. The whisky has an aroma of fresh orchards, honey and soft spices that open up to notes of malt, sweet grapes, heathered spices and honey on the palate, and lead to a long finish with touches of oak and vanilla.

Lagavulin: Aroma of brown sugar, roasted almonds, cinnamon and spicy cloves. Initial notes are surprisingly sweet, with subtle hints of citrus and toffee which give way to notes of nutmeg and cherries. Ever-lasting finish has deep, dark notes of smoky spices and lingers with just a touch of sweetness.