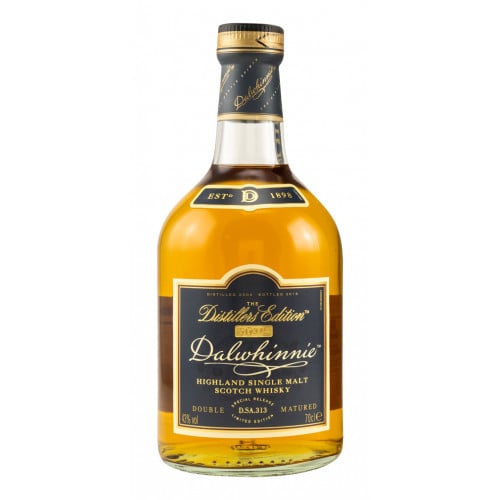 Situated along the Grampian Mountains in the Highlands region of Scotland, Dalwhinnie Distillery was founded in 1897 by John Grant, and was originally named Strathspey Distillery. In 1898, Grant declared bankruptcy and sold the distillery to AP Blyth, who renamed the distillery Dalwhinnie. The name, which roughly translates to "meeting place"in ancient Gaelic, is a reference to the cattle farmers who would pause at the distillery on their journey south to the cattle markets in Crieff and Falkirk.

Dalwhinnie Single Malt Scotch Whisky is made exclusively from freshly harvested, plump barley, which is milled and mashed with water sourced from Lochan an Doire Uaine (meaning "Loch of the Green Thicket"). The pure spring water, which travels through local peat before reaching the loch (the loch itself is situated 2,000 feet above sea level), imparts a soft yet subtle complexity to the whisky. Since no other distillery may legally use water drawn from Lochan an Doire Uaine, no other distillery is able to replicate the unique, malty-sweet taste of Dalwhinnie Single Malt Scotch Whisky.

Dalwhinnie Distillers Edition Highland Single Malt Scotch Whisky was distilled before being matured for approximately fifteen years in oak casks. After its initial maturation, the whisky was double-barreled, or finished, for an additional year in casks that were formerly used to mature Oloroso sherry, before it was finally bottled. The whisky has an aroma of fresh orchards, honey and soft spices that open up to notes of malt, sweet grapes, heathered spices and honey on the palate, and lead to a long finish with touches of oak and vanilla.

Aroma of fresh orchards, honey and soft spices that open up to notes of malt, sweet grapes, heathered spices and honey on the palate. Long finish with touches of oak and vanilla.