Size750mL Proof80 (40% ABV)
Made from virgin sugar cane honey, and distilled partly in copper alembic and partly in a steel continuous column, Dictador 12 Year is complex, with a hint of smokiness, citrus, oak, and vanilla.
Notify me when this product is back in stock. 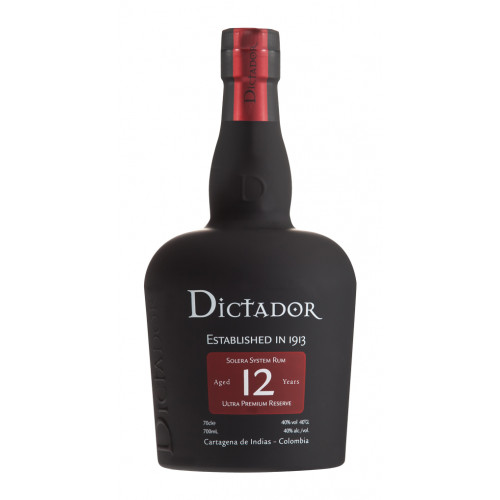 Dictador is made from the virgin nectar of raw sugar canes. Once the nectar has been fermented, it is distilled through a stainless steel alembic still and solera-aged in casks that were previously used to mature Jerez and Port. Solera aging is a process that has generally been reserved for aging cognacs, ports and sherries. It involves filling a series of casks at different intervals over a long period of time.

Dictador 12 Years Solera System Rum is crafted from the fermentation of virgin sugar cane honey, distilled partly in copper alembic and partly in a steel continuous column. This is a solera aged rum, drawn from the solera vats at the point where the rum comes of age (at least 12 years). Rums both young and old are blended in these vats yielding layers of complexity in flavor. Bottled at 40% ABV.

Baking spices, brown sugar, cinnamon, and vanilla on the nose. The palate is complex, with a hint of smokiness, citrus, oak, vanilla, toffee. The finish is dry with fruit, and oak tannins.