Size750mL Proof90 (45% ABV)
Devils River Rye Whiskey is Devils River Bourbon's spicier brother. It's their way of paying tribute to American whiskey of old and consists of a mash of 51% rye, 45% corn, and 4% barley.
Notify me when this product is back in stock. 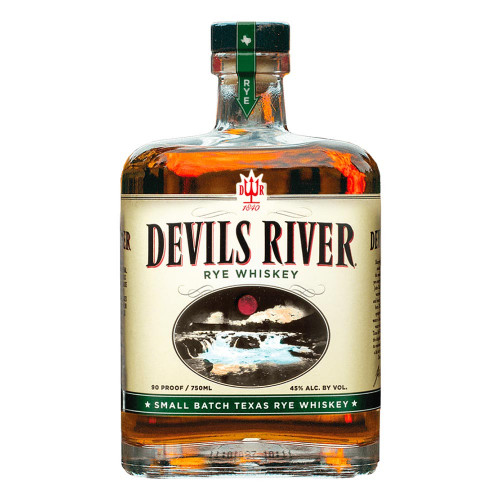 Based in Frisco, Texas, Devils River Whiskey was founded by Mike Cameron, co-founder of Rebecca Creek Whiskey, and president of the Texas Distilled Spirits Association. Their 90-proof bourbon is crafted from the pure Devils River spring waters. The illustrious Texas Ranger John Coffee Hays was one of the first explorers to come across it and named this impressive waterway the "Devils River" in 1840. Nowadays the naturally-filtered limestone spring water is considered the purest water in Texas.

In college, Cameron would take frequent trips to the feisty Southwest Texas river, the tributary of the Del Rio that would inspire the name of his new whiskey label as well as provide a pure foundation for the whiskey. Devils River whiskey is distilled using a signature method - traditional copper pot stills designed for distilling complex, flavorful, dark spirits.

Devils River Rye Whiskey is their Bourbon's spicier brother. Crafted as Devils River's answer to the recent cry for more rye whiskeys, this small-batch affair is also their way of paying tribute to American whiskey. It consists of a mash of 51% rye, 45% corn, and 4% barley, which results in an exquisitely balanced taste profile with prominent spice, as well as notes of vanilla, apples, and pepper. The spice balances perfectly with the sweetness of honey and maple and brings some undertones of wood and pepper.

The taste profile is balanced and spice-forward, containing notes of vanilla, apples, and pepper. The spice balances perfectly with the sweetness of honey and maple and brings some undertones of wood and pepper.