Rating:
100%
1
Size750mL Proof92 (46% ABV)
Crafted in Buena Vista, Colorado, this grain-to-glass single malt whiskey is uniquely American. Made with a mash bill of 100% malted barley, it's double-distilled, then aged in new charred white oak for at least 2 years, before being bottled at 92 proof.
Notify me when this product is back in stock. 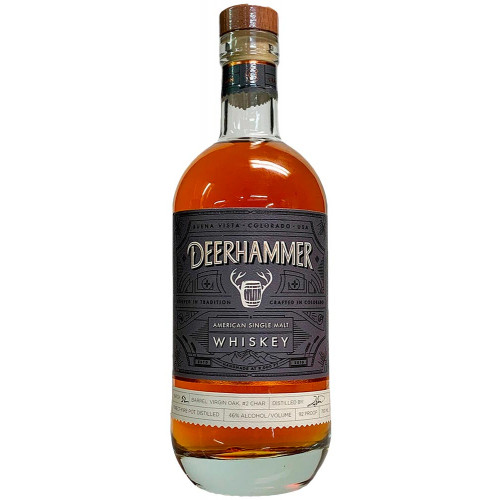 Deerhammer was founded in 2010 by Amy and Lenny Eckstein. The independent operation is based in Buena Vista, Colorado. Firmly rooted in tradition and propelled by creativity, the independent distillery crafts single-barrel American whiskey. It's a grain-to-glass operation, meaning in-house recipe creation, mashing, fermentation, distillation, and maturation. The distillery was built by Eckstein himself, repurposing dairy equipment and machinery. The 140-gallon direct-fire copper-pot still is the exception, as it was commissioned from an Arkansas artisan and made in the Scottish style. They currently produce 5 expressions: American Single Malt Whiskey, Pot Still Rye, a 4-grain Straight Bourbon, Hickory Smoked Corn Whiskey, and the Dutch Style Gin.

Deerhammer American Single Malt Whiskey starts with a 100% malted barley mash that is similar to what porters are made of. The mash gets open-air fermented, double-distilled, then matured for at least 2 years in new charred white oak. It's a complex and rich whiskey that draws from its Scottish and Irish counterparts, yet is wholly unique and American. Its profile is shaped by the high-alpine climate of Buena Vista with its fluctuating daily temperature, which helps maximize the flavor potential of the mash. Bottled at 92 proof, the whiskey has won several prestigious awards.

The nose has inviting vanilla, orange, and caramel notes. There's caramel, citrus, spice, sweet coffee, and chocolate on the rich and complex palate with a softer sweetness. Finishes smooth and long with lingering notes.