Size750mL Proof96 (48% ABV)
This American single malt expression had the folks at Copper Fox use peachwood as a smoke agent during the kiln drying process as well as while the spirit was aging in the barrel, resulting in a uniquely fruity, smoky, and complex craft whiskey. 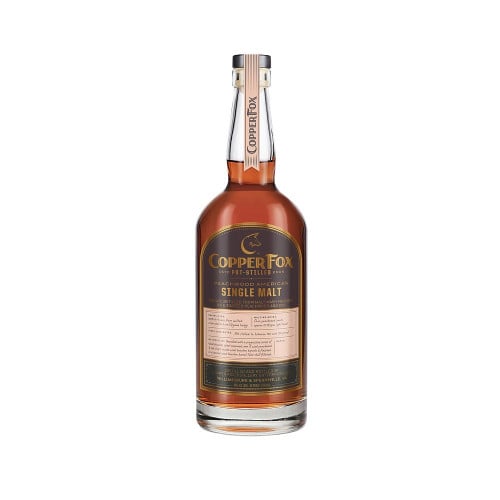 "The foundation of our product is Thoroughbred barley from our own private grower and used by no other distillery," says Rick Wasmund, the owner and master distiller at Copper Fox Distillery. Situated along the banks of the Thronton River in Sperryville, Virginia, Copper Fox Distillery was opened in 2005 after Wasmund returned to the United States following an internship at Bowmore Distillery. "Of course, I'm proud of our innovations," adds Wasmund, "but I am keenly aware of the fact that I'm standing on the shoulders of a great many courageous, passionate and brilliant individuals and I try to be ever thankful for the trail they blazed."

The first US distillery to have a malt floor and kiln since the repeal of Prohibition, all grains for Copper Fox whisky are grown locally by one farmer. The barley is floor malted in a traditional manner. Instead of peat, local fruit woods are used in the kiln to gently smoke the grain. The only distillery in the world to age their whisky using toasted apple wood, which results in a complex and unique flavor experience, all Copper Fox whiskies are non-chill filtered and double pot-distilled at a low proof of 150-160 to further bring out the fruitiness.

The craft distillery isn't afraid to seek out new and unusual flavors in the whiskey they make. This never-ending quest has led them to peachwood and the complex notes it's able to bring to the table. It wasn't only used in the kiln drying process for its unique smoky aroma, but during maturation in the barrel as well, resulting in a uniquely fruity, smoky, and complex spirit that's bottled at 96 proof without chill filtration.

"Give peach a chance" with this American single malt today!

The complex whiskey opens with ripe stone fruit and campfire smoke aromas along with a touch of cinnamon. The palate is sweet and earthy with a tannic touch and notes of marzipan, clove, orange zest, and salty smoke notes. The finish has notes of dried fruit, honey, and toasted oak.