Learn more
Size750mL Proof80 Proof (40% ABV) *Please note that the ABV of this bottle may vary
Made with a unique recipe of 14 botanicals, this gin earned the Silver Medal at The Fifty Best Tasting Competition in 2013.
Notify me when this product is back in stock. 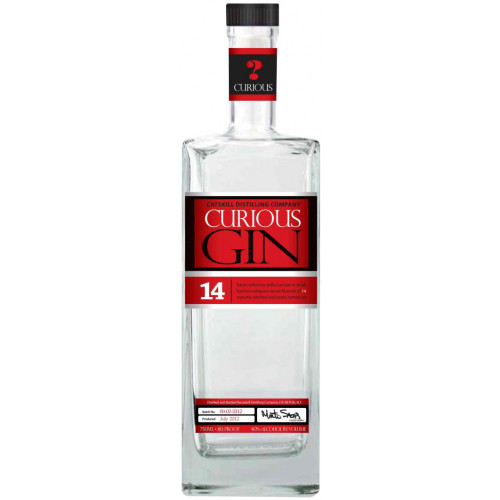 Nestled in the foothills of the Catskill mountains and located just moments away from the site of the original Woodstock Music Festival, Catskill Distilling Company honors the rich history of the Sullivan County Catskills — a unique blend of tradition and revolution. Over three decades ago, Monte Sachs — Catskill Distilling Company's founder and master distiller — attended veterinary school at the University of Pisa in Italy. After class each day, Sachs would meet with an Italian farmer named Bernardini, who taught Sachs how to distill grappa. "He taught me about the importance of sourcing quality ingredients from small farms and about how the shape and size of a still is reflected in the weight and mouthfeel of the spirits," says Sachs.

Catskill Distilling Company's Curious Gin is distilled from locally-grown, whole wheat, which Sachs purchases from a nearby mill. After mashing and fermenting the wheat for approximately five days, Sachs distills the wash through his custom-made, twin 650-liter copper-pot stills imported from Germany. "Some people have said saxophone; some people have said flute; some people have said Willy Wonka," says Sachs, of the still's appearance. "But it is an incredible instrument." The grain-based spirit is infused with a unique recipe of exactly fourteen ingredients, including oranges, cucumbers, Spanish almonds, cassia, cinnamon, coriander, juniper berries and anise. "I searched tirelessly for the perfect combination of regional and exotic botanicals in order to craft the gin," says Sachs.

Following distillation, Sachs brings the gin to proof with pure snowmelt water sourced from the Catskill mountains. The mineral-rich water gives the gin an aroma of herbs and spices, along with a touch of citrus zest and pepper. The aroma gives way to notes of tangy juniper, vanilla, oranges, lemons and dried herbs on the palate, and finishes with a spicy hint of cinnamon and anise.

Aroma of herbs and spices, along with a touch of citrus zest and pepper. Notes of tangy juniper, vanilla, oranges, lemons and dried herbs on the palate. Finishes with a spicy hint of cinnamon and anise.