Be the first to review this product
This 13-year-old straight bourbon was sourced by the legendary Master Distiller Jim Rutledge. It's a premium, smooth, well-balanced, and rich expression that carries the Cream of Kentucky torch with panache.
Add to Wish List
Notify me when this product is back in stock.

J.W. Rutledge Distillery was founded by former Four Roses master distiller Jim Rutledge. As the construction of their new sustainable distillery is underway (a facility that utilizes clean technologies like geothermal heating and cooling, solar energy, and biomass energy), Jim Rutledge sources and blends whiskey from other distilleries to put out new releases under the J.W. Rutledge brands, beginning with Cream of Kentucky.

Their aim is to produce Kentucky straight bourbon whiskey and straight rye whiskey the "old-fashioned way" relative to the requisites, guidelines, and standards for straight whiskey production that have been in place for close to two centuries. The Cream of Kentucky label was first introduced in 1888 by I. Trager & Co. of Cincinnati, Ohio. Before Prohibition ended, the brand was picked up by the renowned Schenley Company and re-introduced to the industry in 1934. Cream of Kentucky reached great success in the 30s and 40s, using the work of famed artist Norman Rockwell.

It's an exceptionally well-balanced and smooth profile that opens with toffee, fruit, spice, as well as a touch of mint. The palate has nutty, chocolate, malt, fruit, as well as cinnamon and oak. Finishes long and pleasantly warming, with rich lingering notes. 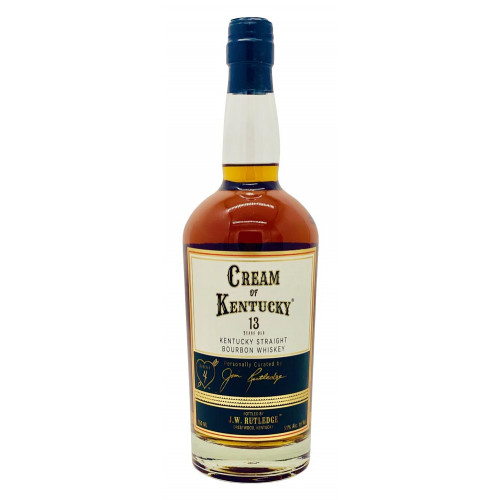