Size750mL Proof80 (40% ABV)
This peated Irish single malt is a highly unusual and very unique. The only Irish whiskey with a smoky flavor.
Notify me when this product is back in stock. 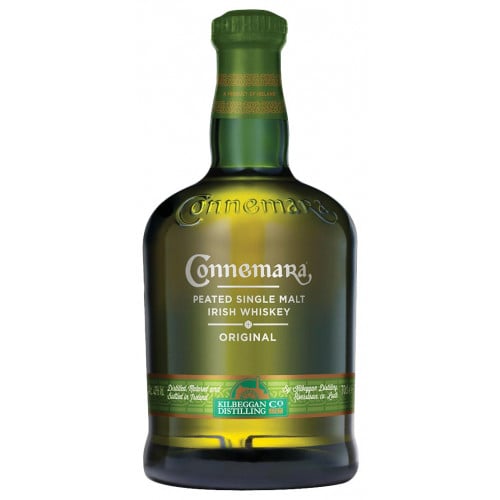 Along the Atlantic Ocean, in the west of Ireland's County Galway, sits one of the most majestic regions in all the Emerald Isle. Home to the Twelve Bens Mountains, abundant peat bogs, a windswept coastline, and countless lakes, the region of Connemara takes its name from the ancient Irish tribal people who lived on the land, the Conmacne Mara.

In the 17th and 18th centuries, a number of distillers called Connemara home. Often operating illegally, these distillers took advantage of the unique lands of Connemara, utilizing the region's peat bogs to produce whiskeys reminiscent of Islay Scotch.

Connemara Peated Irish Single Malt Whiskey, which is produced at the Cooley Distillery in the County Louth, serves as a tribute to the distillers who operated in the region centuries ago. Production of Connemara begins by drying barley over peat sourced from the famed bogs of Connemara. The peaty smoke infuses the barley with its distinctive smell and flavor, laying the groundwork for a powerful whiskey. After drying the barley, the malt is double-distilled in small, copper pot stills, before coming to rest in casks that were formerly used to age bourbon.

This whiskey is quite the anomaly. What makes this single malt distinct is its unusual peated profile, which is highly uncommon for an Irish whiskey. Connemara is widely known as the only Irish whiskey with a smoky flavor.

“Inspired by Ireland’s ancient distilling traditions, Connemara’s smooth sweet malt taste and complex peat flavors makes it a truly unique Irish whiskey.” Connemara is renown for being one of the most decorated Irish whiskeys on the market, with a dossier of Gold Medals including the honor of once being named the “Worlds Best Irish Single Malt.”

A harmonious balance of heavy peat and malt on the nose. The palate is smooth, with flavors of peat, malt and sweetness.