Size750mL Proof86 (43% ABV)
This West Cork expression is a blend of grain (66%) and malt (34%) Irish whiskey that spends 3 years in bourbon casks and an additional 6 months in heavily charred bourbon casks.
Notify me when this product is back in stock. 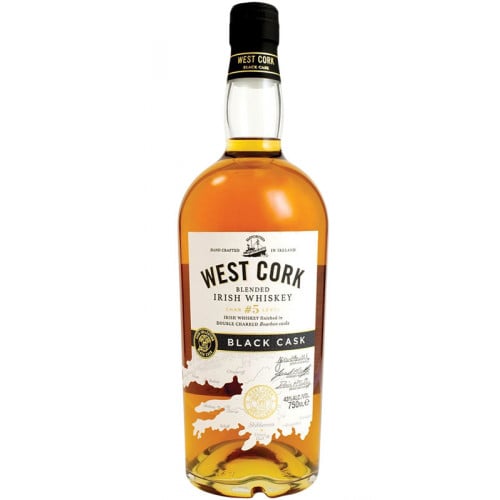 Distilled, matured, and bottled on-site, West Cork offers a diverse lineup of Irish whiskey that is triple-distilled, non-chill filtered, and crafted using local ingredients. West Cork Black Cask Irish Whiskey is a blend of grain (66%) and malt (34%) whiskey that has spent 3 years in bourbon casks, then an additional 6 months in heavily charred (no. 5) bourbon casks. It's a balanced 86-proof expression with vanilla, malt, as well as some pleasant sweetness and light smokiness.

You'll find malt and vanilla on the nose with touches of sweetness and light smokiness. The notes are mirrored on the palate with cereal, toffee, caramel, and hints of fruit, culminating in a spicy and slightly smoky finish.