Size750mL Proof80 (40% ABV)
This eight-year-old Irish whiskey is re-casked in first-fill bourbon barrels, and received a Gold Medal at the 2015 Irish Whiskey Masters. 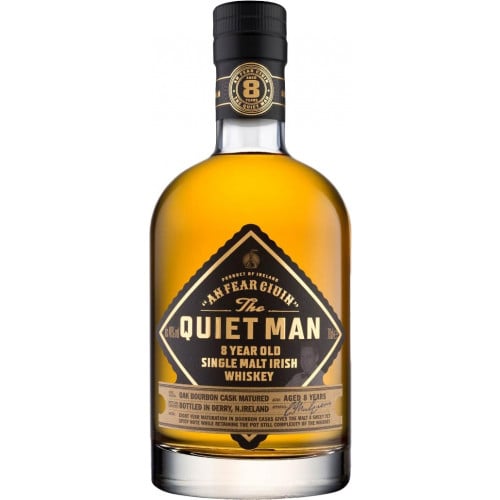 "In more than 50 years behind the bar, my father saw and heard it all," says Ciaran Mulgrew. "But like all good bartenders, [he] was true to the code and told no tales. He was "The Quiet Man," or as they say in the pubs of Ireland, "An Fear Ciuin."

Ciaran Mulgrew created Quiet Man Irish Whiskey to honor his father, John, who spent over half a century tending bar in Belfast, Ireland. As a child, Ciaran would often accompany his father to work, where he fell in love with the sounds and smells of the bar, "the Craic," the laughter, and the beer and the whiskey (especially the whiskey).

Quiet Man 8 Year Old Single Malt Irish Whiskey is distilled through traditional Irish pot stills and aged for eight years in oak barrels before being re-casked in first-fill bourbon barrels. "The difference between a good whiskey and a great whiskey lies not just in picking the best ingredients and having the most skilled distiller," Mulgrew adds. "It lies in selecting the finest barrels to let the whiskey mature in. Our unique process of finishing the aging in barrels that previously held bourbon but never whiskey, allows The Quiet Man to soak up those wonderfully sweet yet spicy oak flavors, and the result is a great Irish whiskey."

The whiskey has a sweet aroma of honeysuckle, crisp apples, vanilla and oak. On the palate, the whiskey is filled with notes of clover, burnt oak, toffee and white fudge, which leads to an incredible finish accented by green tea and caramel.

Sweet aroma of honeysuckle, crisp apples, vanilla and oak. On the palate, the whiskey is filled with notes of clover, burnt oak, toffee and white fudge, which leads to an incredible finish accented by green tea and caramel.