Learn more
Size750mL Proof80 (40% ABV) *Please note that the ABV of this bottle may vary
Only 6,400 bottles of this craft Scotch whisky, which was bottled in homage to the 20th anniversary of Delilah's, will ever be produced.
Notify me when this product is back in stock. 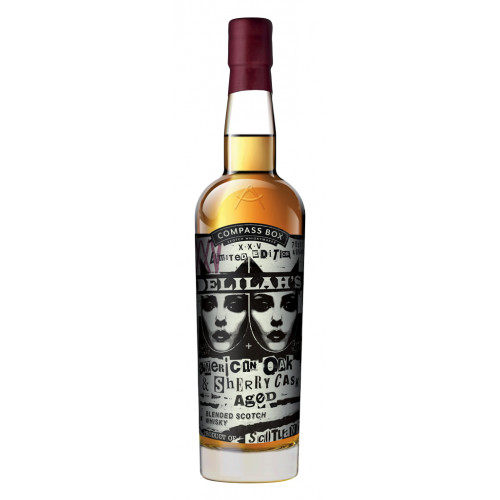 Founded in 1993 by Mike Miller, Delilah's is a legendary punk rock whisky bar nestled in the Lakeview neighborhood of Chicago. The bar stocks over 400 unique types of whiskey, and is said to be "one of the most important bars in the United States,"according to whisky-expert Michael Jackson. "The idea of Delilah's was simple,"explains Miller. "When I was in high school, I had three records and my buddy had two and my other buddy didn't have any. So we'd go to each others' houses and play each other our records and steal booze. Delilah's is an offshoot of that."

Compass Box Delilah's Limited Edition Blended Scotch Whisky is a celebration of the eponymous bar's 20th anniversary. The whisky was developed jointly by Miller and John Glaser, the founder of Compass Box Whisky Co. and one of the most progressive and innovative blenders of his generation. The whisky is a blend of single malt whiskies sourced from the cities of Alness and Longmorn (this comprises approximately 50% of the blend), together with a single grain whisky sourced from the city of Fife (this comprises the remainder of the blend). Once the whiskies were sourced, they were aged in a mix of experimental new American oak casks and rejuvenated American oak hogsheads. "Mike wanted a Scotch whisky that, in his words, "˜thinks it"˜s a Bourbon,'" says Glaser, "so we sourced some single malts aged in new American oak hogsheads, something that"˜s very hard to find in Scotland."

After the whisky had matured, it was brought to proof before being bottled without the use of chill filtration (chill filtration removes the cloudiness that is natural to whisky, but also removes the fatty acids and esters which contribute to the whisky's overall flavor and complexity). Compass Box Delilah's Limited Edition Blended Scotch Whisky has an intense yet subtly complex aroma, with touches of dried fruits and cedar spices. The aroma gives way to notes of honeyed oak, and red fruits on the palate, which are well-balanced by a creamy vanilla undertone. The finish is smooth yet bold, with a sweet caramel flavor balancing notes of cinnamon and baking spices.

Only 6,400 bottles of this craft Scotch whisky, which was bottled in July 2013, will ever be produced. Pick up a limited edition Scotch today!

Intense yet subtly complex aroma, with touches of dried fruits and cedar spices. Notes of honeyed oak, and red fruits on the palate, which are well-balanced by a creamy vanilla undertone. Finish is smooth yet bold, with a sweet caramel flavor balancing notes of cinnamon and baking spices