Size750mL Proof96.6 (48.3% ABV)
A part of The Balvenie’s “Stories Collection”, A Week of Peat is a reincarnation of the 2017 Balvenie Peat Week. All the classically delicate and complex Speyside flavors you expect plus something you’ve never had in a Balvenie before — peat smoke.
Notify me when this product is back in stock. 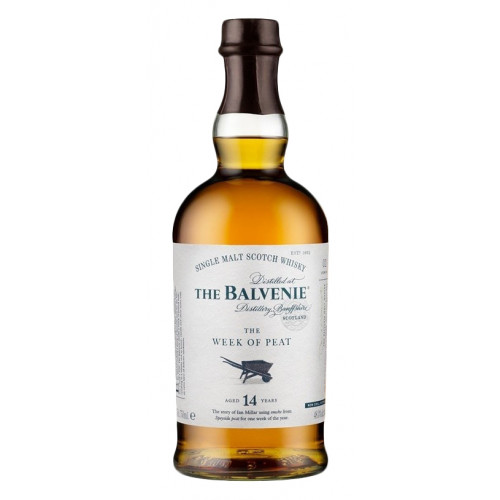 Still owned by William Grant & Sons, The Balvenie has long been a favorite of Speyside Whisky lovers. It’s famous for producing Single Malts in the classic styles of the region — light, fruit-forward, sweet, and clean without a trace of peat smoke. Balvenie took it a bit further, being one of the first to innovate with various double and triple-wood combinations to add complexity. All that adds to a large range of Single Malt agings and wood combinations to entertain the taste buds of fans all over the world.

Released as a part of The Balvenie’s “Stories Collection”, A Week of Peat is a reincarnation of the incredibly unique Balvenie Peat Week. Though recipe remains the same, it has been renamed to fit into the new Balvenie Stories collection. Balvenie Peat Week 2002 was the first vintage of a really interesting idea. It started as the brainchild of David Stewart — Balvenie’s malt master — and whisky specialist Ian Miller. For one week each year they would distill peated Single Malt and thus turn the entire distillery on its head. Everything else stays the same, and the spirits are then aged in ex-Bourbon casks for a full fourteen years and bottled at 48.3% ABV.

You can still taste the signature Balvenie Single Malt style — notes of tropical fruits, honey, peaches, and vanilla. But now it also has a warm, earthy smoke flavor and aroma. It’s Balvenie as you’ve never had it before, and still very different from the famous Islay peated spirits on the other side of Scotland. It’s should be on the “must have” list of every Speyside and Balvenie fan.

Delightfully complex, the nose is full of tropical fruits and almonds with a dash of smoke. The palate is creamy with vanilla, peaches, graham crackers, a “floral smokiness,” and a long honeyed finish.