This product is available in: CA, DC, IL, NY Unfortunately, we can't ship to PO Boxes and APO addresses.

Size750mL Proof86 (43% ABV)
This new limited edition Aberfeldy single malt is finished for 4-5 months in first-fill Pauilliac wine casks — a rich and complex red wine from Bordeaux.
Notify me when this product is back in stock.

This product is available in: CA, DC, IL, NY Unfortunately, we can't ship to PO Boxes and APO addresses. 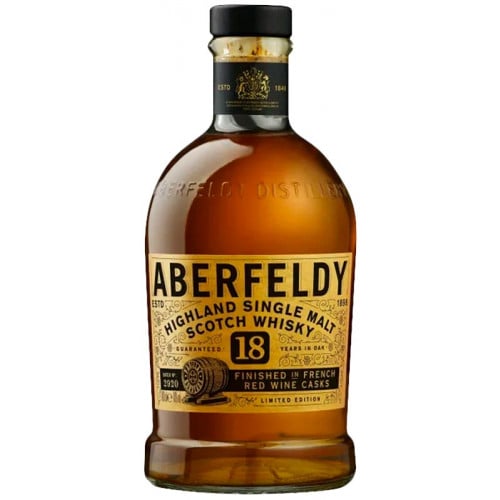 Part of The Last Great Malts of Scotland campaign, Aberfeldy whiskies are crafted from water sourced from the Pitilie Burn, famed for its gold deposits. Aberfeldy 12-Year-Old Single Malt Scotch Whisky is made exclusively from barley that is milled through the distillery's Porteus mill before being mashed and then fermented in stainless steel washbacks. Following fermentation, the whisky is distilled once through Aberfeldy's copper-pot wash stills and then again through its copper-pot spirit stills. Then, this Aberfeldy single malt is matured in a combination of casks that were previously used to mature bourbon.

This is a new limited edition, single malt addition to the Aberfeldy range. Initially spending 18 years in a combination of refill casks, this whisky undergoes a finishing period of around 4-5 months in first-fill Pauilliac wine casks — a rich and complex red wine from Bordeaux.

Malt Master, Stephanie MacLeod, carefully monitored maturation and flavor development in the casks until the desired flavor profile had been achieved. Pauillac is a robust wine, so the goal was to use this cask type to complement and elevate the signature character of Aberfeldy, not mask it.

The warmth and smoothness of Aberfeldy whisky evolves into soaked dark fruit flavors, like dates, redcurrants and apricots.