Learn more
Size750mL Proof86 (43% ABV) *Please note that the ABV of this bottle may vary
Aged for over 20 years, this whisky earned the Silver Medal at the International Wine & Spirits Competition in 2013.
Notify me when this product is back in stock. 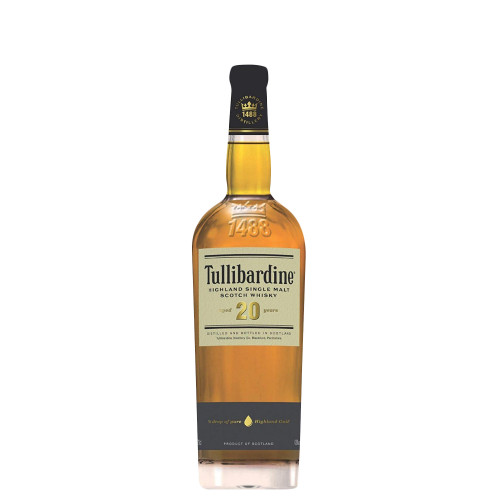 Tullibardine Single Malt Scotch Whisky is made exclusively from locally-sourced malted barley. Once the grains arrive at the distillery, they are milled and mashed before being fermented in the distillery's washbacks. Following fermentation, the wash is distilled through the distillery's copper-pot stills (the stills were installed in 1974).

Once the whisky has been distilled, it is matured in first fill bourbon barrels for over two decades. This twenty-year maturation process contributes notes of vanilla, cocoa, honey and cinnamon oatmeal to the whisky, and gives it a subtle yet sweet finish.

Tullibardine 20 Year Old earned the Silver Medal at the International Wine & Spirits Competition in 2013 and the Bronze Medal at the World Whiskies Awards in 2014.

Aroma of vanilla, white chocolate, cocoa and allspice. Notes of honeyed oak, cinnamon oatmeal, caramel, pear, apple cider and maple syrup on the palate. Finish is subtle yet sweet, with a touch of orange and citrus.