Learn more
Size750mL Proof92 (46% ABV) *Please note that the ABV of this bottle may vary
This special expression is a limited edition release, named for the legends of the sea around Ardbeg. The deep sea peaty single malt is aged in special Black Sea barrels.
Notify me when this product is back in stock. 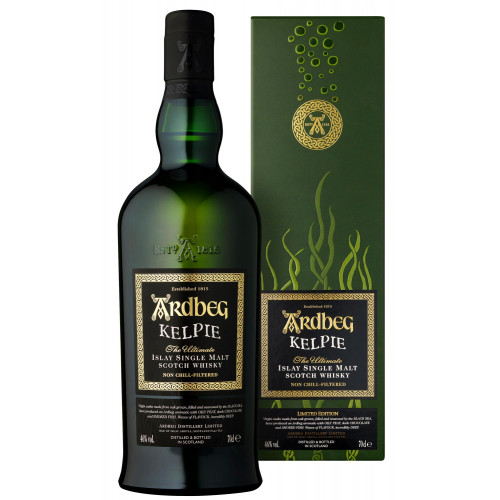 Ardbeg Single Malt Scotch Whisky is made from malted barley, which is peated to approximately 50 phenol parts per million (in contrast, Leviathan II Whiskey is peated to 110 phenol ppm, while Octomore 5.1 is peated to 169 phenol ppm). Once the peated barley arrives at the distillery, it is milled and mashed with water sourced from Loch Uigeadail, which is situated approximately 3 miles away from the distillery. Then, the mashed barley is fermented in washbacks made of Oregon pine.

While wooden washbacks are more expensive and difficult to maintain as compared to stainless steel washbacks, they absorb a portion of the heat generated during the fermentation process and thus, create a lighter and more rich whisky. In addition, the wooden washbacks contribute estery, carbolic compounds to the whisky.

Ardbeg Kelpie is a limited edition, single malt release, named for the legends of the sea around Ardbeg. “Its powerful aromas of oily peat, salty seaweed and tarry rope have been produced by virgin oak casks from the Black Sea, intermingled with the hallmark Ardbeg flavor profile. Waves of spicy black pepper give way to a delectable tide of bacon and dark chocolate” (Ardberg). Kelpie is non chill-filtered, and bottled at a solid strength of 46% ABV. The peaty single malt won a Silver Medal at the 2017 International Spirits Challenge.

Pick up a bottle of this special limited edition today!