Size750mL Proof86 (43% ABV)
Served at the 1969 and 1989 Presidential Inaugural Dinners, the recipe for Usquaebach Old Rare Scotch Whisky dates back to the 1700s.
Notify me when this product is back in stock. 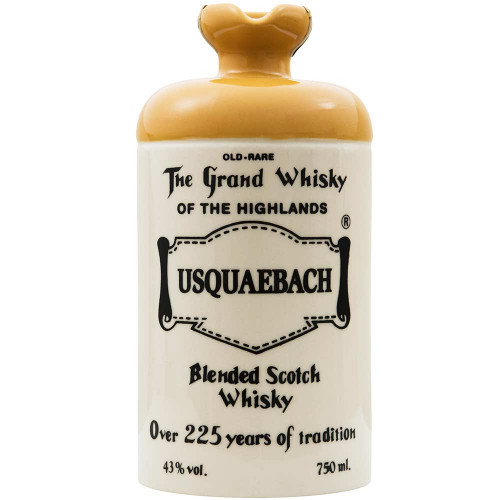 Translated from Gaelic as “the water of life,” Usquaebach – pronounced “oos-ke-bah” – is the etymological root of the modern word “whisky.” “With Usquaebach we’ll face the devil,” says Scottish poet Robert Burns in his famous 1791 work Tom O’Shanter.

While the word itself was first trademarked in 1877, the blend used in Usquaebach Blended Scotch Whisky actually dates back to the 1700s, when traveling merchants and artisans would combine spirits from the highest-caliber single distilleries to create fiery, sophisticated blends consumed by people throughout the country’s rolling hills.

Usquaebach “Old Rare” Blended Scotch Whisky is crafted by Usquaebach’s master blenders, who search for the very best malts and grains from Scotland’s most reputable single malt distilleries. The blend contains 41 specially-selected single malts which are up to 20 years old – 85% of the blend is comprised of such single malt whiskies, with the remaining 15% made up of blended grain whiskies (the blending has been done by the Laing family in Scotland for over 100 years).

As a result, Usquaebach “Old Rare” Blended Scotch Whisky has noticeable aromas of coffee, tobacco leaf and white pepper. The palate is smooth, with notes of saddle leather and lemon curd leading to a long, complex finish with hints of seasoned oak, charcoal and fresh mint.

Usquaebach “Old Rare” Blended Scotch Whisky was served at the 1969 and 1989 Presidential Inaugural Dinners (for Presidents Nixon and H.W. Bush). Pick up a timeless whisky appreciated by connoisseurs the world over today!

Aromas of coffee, tobacco leaf and white pepper. The palate is smooth, with notes of saddle leather and lemon curd leading to a long, complex finish with hints of seasoned oak, charcoal and fresh mint.