This product is available in: DC, IL, KY, NY Unfortunately, we can't ship to PO Boxes and APO addresses.

Size750mL Proof92 (46% ABV)
Affinity showcases the mouthcoating texture and ripe fragrance of Calvados, partnering it with the rich spiciness and malty aromas of Scotch whisky. These two spirits really do have an Affinity for one another.
Notify me when this product is back in stock.

This product is available in: DC, IL, KY, NY Unfortunately, we can't ship to PO Boxes and APO addresses. 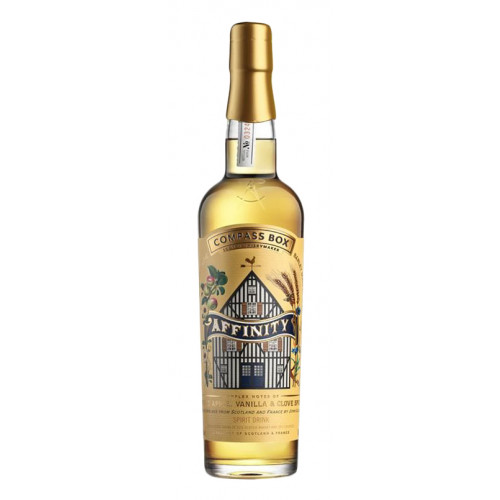 Compass Box was founded in 2000 by entrepreneurial visionary John Glaser, in London, England. After being in the wine industry, Glaser made the move to Diageo, where he came into the whisky industry. Compass Box is known to challenge convention and tradition in pursuit of “whisky and its enjoyment.” Located in a seemingly incongruous London, England, Compass Box is not a Scottish distiller but a blender of Scottish whiskies, combining the best casks from Islay, Speyside and the Highlands, and aging them in “a variety of woods from sherry casks to toasted French oak.”

Glaser pushes the boundaries of innovation to new levels with his art of “whisky-making.” Seemingly uninhibited by the norms of the formidable Scottish whisky industry, Glaser has proven himself a true alchemist. In 2005, his aptitude for wine making prompted a disruptive experimental sensation; The Spice Tree release, a blended whisky made using inner staves, or wooden slats inserted into casks to enhance flavor. Wine-makers use this technique as a more economical way to add oak flavor wine.

Compass Box Affinity is a unique blend of Calvados and Scotch whisky. Normandy and Scotland are both northern European known for their cool, maritime climates. While Scotland is known agriculturally for their cereals, Normandy is known principally for its apples. Orchard fruit notes are common to both Calvados and Scotch malt whisky. Many Calvados producers double-distill in pot stills, just like their Scottish cousins. Maturation in French oak is another aspect of their shared DNA.

The result is a classic flavor combination of apples and spice riffing off dried fruits and vanilla. The Calvados imparts an intensity and lingering onto the character of the Scotch whiskies. The Calvados are sourced from Domaine Christian Drouin while the single malt is sourced from the Craigellachie Distillery in Speyside. This is then blended together with a proprietary combination of Highland single malts, finished with a blended Scotch of unknown origin.

Layers of apple character marry beautifully with malty, vanilla and spice- like notes. The French and the Scottish distillates build upon one another, creating a blend that displays weight and singular intensity, with a powerfully long-lived finish.