$60.99
Caskers Rewards members earn up to 3 store points back when buying this bottle.

Size750mL Proof88 (44% ABV)
Aged for six years, this rhum earned a score of 96 points at the Ultimate Spirits Challenge, where it was rated the top rhum agricole in the world.
Notify me when this product is back in stock. 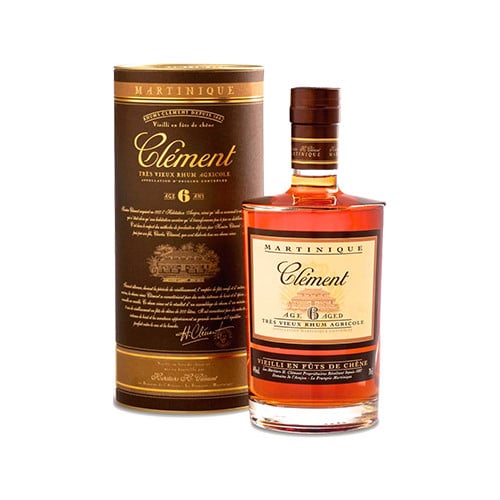 Sugarcane traces its history back to the Indus Valley where it was originally cultivated nearly 5,000 years ago. In the late fifteenth century, Christopher Columbus introduced sugarcane to the Caribbean, planting it on the island of Hispaniola (presently, the Dominican Republic and Haiti). Sugarcane quickly became the staple crop of the Caribbean islands, where it was harvested and refined before being exported to Western Europe and New England. Molasses, the byproduct of refining cane sugar, was used by Caribbean farmers to distill rum, which was sold to the many ships that sailed through the islands.

Rhum Clément is a rhum agricole crafted on the island nation of Martinque. The rhum is made exclusively from sugarcane harvested on the Domaine de l'Acajou Estate, which was purchased by Homère Clément in 1887. In order to harvest the sugarcane, expert farmers chop the stalks of the cane as low to the ground as possible in order to preserve the highest concentration of glucose (due to its weight, glucose is pulled to the bottom of the stalk by gravity). Then, within an hour of its harvest, the sugarcane is transported to the distillery and crushed in order to preserve the most fresh and raw flavor possible.

Once the sugarcane juice has been extracted, it is fermented with an organic, proprietary strain of yeast before being distilled through Clément's single-column copper still (the still is modeled after the classic Armagnac stills of France). The rhum is then rested in stainless steel tanks for approximately nine months. During this time, a gentle stream of filtered air flows through the rhum and removes any unpleasant esters, which would detract from its flavor profile. Then, the rhum is aged for a minimum of six years in a combination of virgin and recharred American oak barrels.

As a result, the rhum has a slightly floral aroma, with touches of banana, tropical fruits and crème brÃ»lée. The aroma gives way to notes of caramel, molasses and charred oak on the palate, which are balanced by a subtle smoky undertone. The finish is sweet and smoky, with hints of vanilla and char complementing each other.

Slightly floral aroma, with touches of banana, tropical fruits and crème brÃ»lée. Notes of caramel, molasses and charred oak on the palate, which are balanced by a subtle smoky undertone. Finish is sweet and smoky, with hints of vanilla and char complementing each other.