Learn more
Size750mL Proof80 (40% ABV) *Please note that the ABV of this bottle may vary
Made in San Francisco using only 100% Hawaiian molasses, this rum earned the Double Gold Medal at the 2008 San Francisco World Spirits Competition.
Notify me when this product is back in stock. 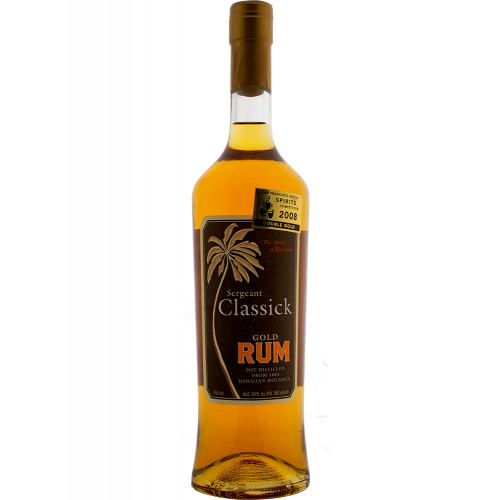 In 1835, the first sugar plantation on the island of KauaÊ»i — the oldest island in the Hawaiian archipelago — was founded. The volcanic island's soil, along with its tropical climate (the average annual rainfall is 460 inches, making it one of the wettest spots on earth), resulted in a sugar cane crop that was pure and incredibly flavorful. For the next century, sugar plantations dominated the 500-square-mile island until World War II, when most of the land began to be used for ranching.

Gay & Robinson Plantation — which opened its doors 1894 — was KauaÊ»i's last remaining sugar plantation, and the supplier of the molasses that Essential Spirits uses to distill Sergeant Classick Gold Hawaiian Rum.

Dave Classick, Essential Spirits' master distiller, fell in love with the Hawaiian islands after returning from combat during the Vietnam War. Each year, Classick and his family travel to Hawaii in order to pick up molasses from Gay & Robinson's plantation. They then transport the molasses to San Francisco, where they distill it in a handmade alambic copper-pot still. After distillation, Classick exposes the rum to oak chips (rather than barrel aging it) and brings it to proof using water from the Hetch Hetchy Valley, a glacial valley in the northwest corner of Yosemite National Park.

Try a taste of Hawaii today!

Initially sweet and sour aroma that is slightly citrusy. Opens to more floral notes. Notes of caramel, oak and honey with a bare hint of vanilla.