Size750mL Proof80 (40% ABV)
Chivas Ultis is the first blended malt Scotch whisky from the House of Chivas Regal. It contains five precious signature single malts, each one hand-selected from five Speyside distilleries. Less than 1% of Chivas’ entire inventory of whisky was selected to make this exquisite blend. 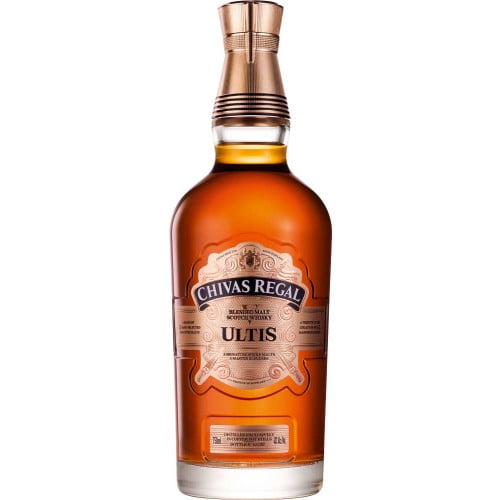 James and John Chivas, who joined the family business in the mid-19th century, noticed a growing demand among their affluent customers for a smoother whisky. Unsatisfied with the products currently available on the market, James and John began experimenting with their own proprietary blends, quickly building a reputation as pioneers in the art of whisky blending. The duo released their first blend, Royal Glen Dee, in the 1850s, followed shortly thereafter by Royal Strathythan, each providing a springboard for future Chivas Regal creations.
Today, Chivas Regal calls Strathisla Distillery in Speyside, Scotland its home. There, Master Distiller Colin Scott, who has over 40 years experience in the industry, continues the Chivas Brothers tradition which began nearly two centuries ago. To create Chivas Regal's signature smoothness, Scott blends single malt whisky produced at the Strathisla Distillery with dozens of other single malts, ultimately producing a scotch that is greater than the sum of its parts.

Chivas Ultis has an aroma bursting with ripe peach and soft red apples, followed by notes of strawberry jam, cinnamon, fudge and honey. The smooth palate fills the mouth with luxurious milk chocolate, echoing the nose with flavors of clementine, orange, and peach layered over a foundation of soft caramel and spicy cloves that leads to a long and sweet finish.

Pick up a bottle of the first blended malt Scotch whisky from the House of Chivas Regal today!