Size750mL Proof96 (48% ABV)
This is the first Glen Garioch whisky ever matured exclusively in virgin casks composed of North American oak.
Notify me when this product is back in stock. 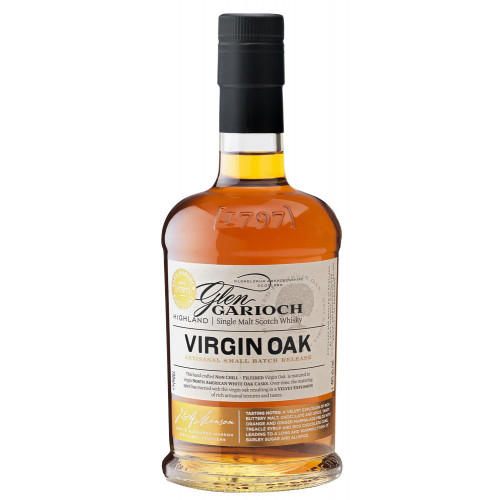 Situated in the village of Old Meldrum in the Scottish Highlands, the Glen Garioch Distillery (pronounced Glen Geery) was founded in 1797 by John and Alexander Manson. The distillery is one of the oldest in Scotland, and takes its name from the Valley of the Garioch, which is situated adjacent to the distillery and is known for producing the finest barley in all of Scotland. The distillery — the most easterly in Scotland — enjoys the temperate climate and cool breeze that are ideal for the production and maturation of whisky.

Glen Garioch Single Malt Scotch Whisky is made from barley harvested from the Valley of the Garioch. After the barley has been harvested, it is mashed and fermented with water drawn from the Silent Spring. In 1968, production of whisky at Glen Garioch Distillery was suspended as the area surrounding the distillery experienced a severe drought. Four years later, an incredibly pure spring was discovered upon a neighborhooding farm. The Silent Spring, as it came to be known, could neither be seen nor heard without modern instruments, and has been Glen Garioch's water source for over four decades. Once the barley has been fermented, it is distilled twice — first through Glen Garioch copper-pot wash still and then again through its spirit still.

Glen Garioch Virgin Oak Single Malt Scotch Whisky Artisanal Small Batch Release is the first Glen Garioch whisky ever matured exclusively in virgin casks composed of North American oak. While Scotch has traditionally been matured in used sherry, port and bourbon casks, the use of new oak casks to finish whisky is another weapon in a distillery's arsenal and allows the whisky to enjoy the sweeter and more complex flavors of virgin wood. Following maturation, the whisky is bottled without the use of chill filtration or artificial coloring.

As a result of this maturation process, the whisky has a rich aroma of buttered bread, white chocolate and orange spices. The aroma gives way to notes of tangy orange, ginger, marmalade and maple syrup on the palate, and leads to a finish accented by touches of malt, brown sugar and cloves. "Glen Garioch's intense flavour means it holds up well in a new fill cask, allowing the liquid to be fully matured in virgin oak and not just finished in the barrel," says Master Blender Rachel Barrie.