This product is available in: CT, RI Unfortunately, we can't ship to PO Boxes and APO addresses.

Size750mL Proof100 (50% ABV)
The six-row heritage variety Bere Barley is a long forgotten grain from the modern world of standardized whisky making.
Notify me when this product is back in stock.

This product is available in: CT, RI Unfortunately, we can't ship to PO Boxes and APO addresses. 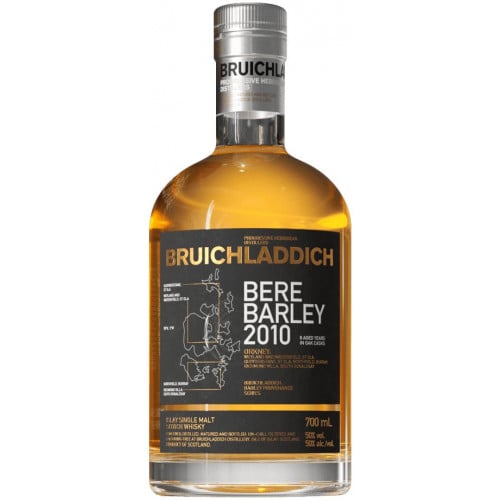 The six-row heritage variety Bere Barley is a long forgotten grain from the modern world of standardized whisky making. The revival of Bere Barley into the present day has taken the efforts of an entire network of millers, growers and agronomists. Bruichladdich’s Bere project is dedicated to preserving a legacy, discovering modern applications to flavorful food and drinks. This Bruichladdich Bere Barley was distilled in 2010 from a 2009 harvest, brought home by Peter, John, Magnus, Sydney and Duncan on the Orkney Islands. The result is a unique dram with complex notes of peaches, honey, chocolate, cinder and oak.

Intense fruit, ripe pear and peaches in syrup, lemon meringue pie, fresh linens, oak, honey, vanilla, hints of cinder, coconut, toffee and fudge, peaches. On the palate are sweet fruit and oak notes, candied peaches, chocolate, honey, cinder, toffee and apricot jam, there is an amazing sweetness from the oak and malt. On the finish are notes of apple, pear and peach notes.