Learn more
Size750mL Proof92 (46% ABV) *Please note that the ABV of this bottle may vary
This new whisky, the oldest ever released by the 21-year-old distillery, is a new fixture in Arran’s core range. 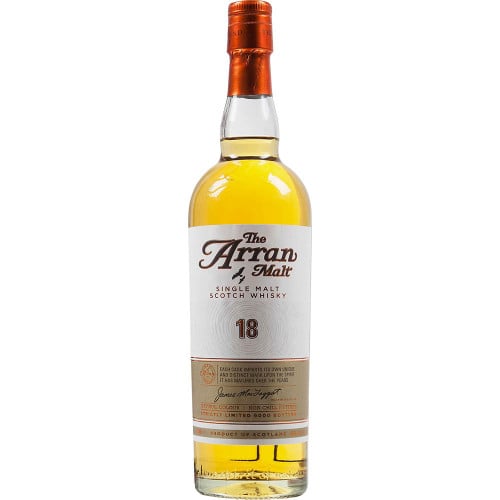 After a trilogy of limited edition expressions, Arran has finally unveiled Arran 18 Year Old Single Malt Scotch Whisky, the oldest whisky ever released by the distillery and a new, permanent fixture in Arran’s core range. “This is a very special bottling for us,” says MacTaggart. “As the most mature expression of the Arran Malt, it represents the very best of the distillery in this, our 21st year.”

The whisky is made from unpeated Scottish barley, which is malted and then fermented using a proprietary strain of yeast. Once the barley has been fermented, the wash is distilled twice — first through Arran’s copper-pot wash still and then again through Arran’s copper-pot spirit still. The stills were custom designed, says MacTaggart, and “shaped to allow the lighter vapors to come up through the stills.” As a result, Arran Single Malt Scotch Whisky has an appreciably softer and more delicate flavor profile.

Arran 18 Year Old Single Malt Scotch Whisky is matured exclusively in ex-sherry butts for a minimum of 18 years before being bottled at the distillery at 92 proof. As a result, the whisky has a deep golden color and enticing aroma of caramel, honeysuckle and toasted oak. The palate morphs into flavors of tropical fruit, particularly pineapple rinds, as well as toffee and candied nuts. A rich finish lingers with notes of dark chocolate, cinnamon and cream.

Deep golden color and enticing aroma of caramel, honeysuckle and toasted oak. The palate morphs into flavors of tropical fruit, particularly pineapple rinds, as well as toffee and candied nuts. A rich finish lingers with notes of dark chocolate, cinnamon and cream.