Learn more
Size750mL Proof92 (46% ABV) *Please note that the ABV of this bottle may vary
This expression is a collaboration between Parisian restauranteur Tim Johnston and whisky maker John Glaser. 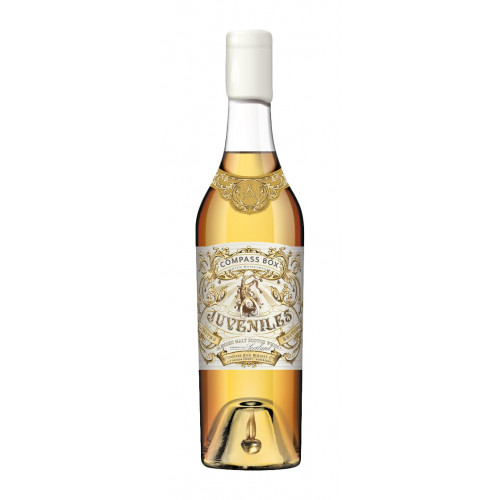 Glaser pushes the boundaries of innovation to new levels with his art of “whisky-making.” Seemingly uninhibited by the norms of the formidable Scottish whisky industry, Glaser has proven himself a true alchemist. In 2005, his aptitude for wine making prompted a disruptive experimental sensation; The Spice Tree release, a blended whisky made using inner staves, or wooden slats inserted into casks to enhance flavor. Wine-makers use this technique as a more economical way to add oak flavor wine.

Compass Box are strong advocates for quality cask selection. They use only whiskies in their blends that are aged in first-fill American oak casks which tend to yield more vanilla character, richness and sweetness than the traditionally used casks in Scotch maturation. They also use a high a malt content, differentiating themselves from most Scotch whisky producers.

This whisky is inspired by Juveniles Bistrot à Vins in the 1st Arrondissement of Paris, that for over 30 years, has been a crossroads for winemakers, spirits producers, writers and various sorts of affable hedonists from all over the world. The restaurant was opened by Tim Johnston in 1987. This whisky is a bright smooth marriage of whiskies between 12 and 15 years- old, comprised of single malt whiskies from Strathmill, Balmenach and Clynelish distilleries, each bringing a distinctiveness to the whole.

Notes of barley sugar, pear, followed by drops of vanilla, ethereal notes and an herbal finish.