Learn more
Size750mL Proof100.8 (50.4% ABV) *Please note that the ABV of this bottle may vary
Distilled in 2011 at Caol Ila, this single-cask single malt comes from Islay. The distillery is known for subtler peat notes than its Islay neighbors, and this 9-year-old release is no different. It was bottled at 100.8-proof, letting its complex aromas shine.
Notify me when this product is back in stock. 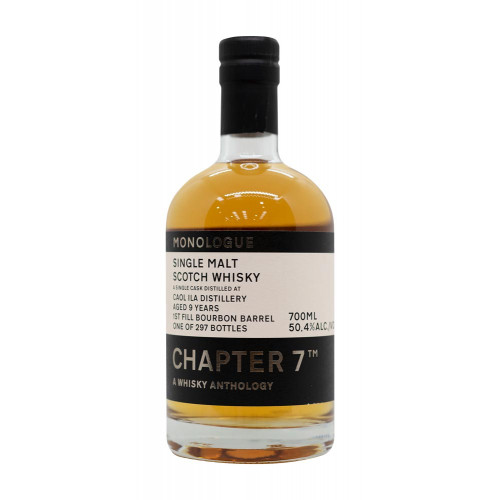 Chapter 7 has three series of expressions: Monologue, Anecdote, and Chronicle. The first are unique single casks, the second once-in-a-lifetime small batches or married atypical whiskies, the third has their aging reserves. The 12th release in the Monologue series comes from the Islay Caol Ila distillery. Known to be less smoky than its Islay neighbors, the distillery employs different mashing and fermenting practices as well as stills, producing fruitier single malts that are a great entry point into the world of peated whisky, as well as suiting palates that prefer their peat notes on the subtle side. This expression comes from Chapter 7's hogsheads that were re-racked into first-fill bourbon casks. Distilled in 2011, this hogshead yielded 297 bottles of the 9-year-old spirit, cut down to 100.8 proof.

Grab a bottle of this subtle single-cask Islay whisky today!

The nose has complex aromas of tobacco, peat, rosemary, lemon zest, and vanilla. Citrus is balanced with smoked barley and brine on the bright palate. Finishes with lingering caramel and pear notes.