Learn more
Size750mL Proof112.4 (56.2% ABV) *Please note that the ABV of this bottle may vary
From an anonymous distillery, only 1076 bottles of this special 19 year old Sherry cask aged, Highland malt were ever produced.
Notify me when this product is back in stock. 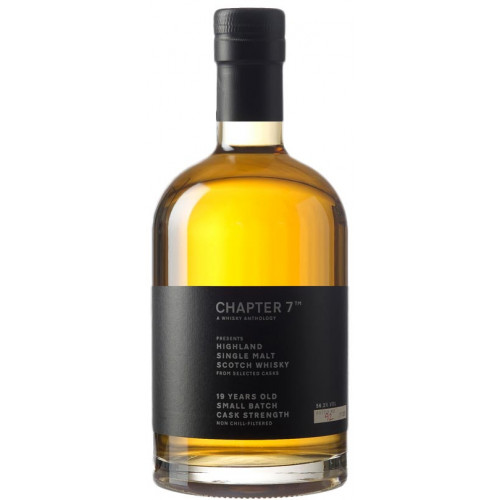 Evin gives lesser-known distilleries and their casks the spotlight, hidden gems with exceptional quality and character. With a team of whisky experts, the final selection is the product of collaborations with fifteen different suppliers, service providers and trade partners.

Their impressive range of spirits include four single malts that averaged 91.6 points in Jim Murray's Whisky Bible 2016. Their Tormore 1995 edition received a Liquid Gold Award in the 2017 Whisky Bible, and 2 Liquid Gold Awards with Peatside 2009 Blended Malt and Irish Single Malt 1999 aged in a rum cask.

Chapter 7 Highland Small Batch 19 Year Old is fairly distinct even for a company like Chapter 7. These casks of 19 YO, Sherry cask aged, Highland single malt Whisky (casks #796 & #1476) are very limited. With notes of roasted peaches, biscuits and apple-pecan pie, only 1076 bottles were produced. This well-seasoned Scotch is bottled at 56.7% ABV.

Roasted peaches, rancio, fresh biscuits, and cream on the nose. Apple-pecan ice cream, lemon zest, and cranberry scones on the palate. The finish is warm, long, and lightly sweet.