Caskers Rewards members earn up to 24 store points back when buying this bottle.
Size750mL Proof93.4 (46.7% ABV)
The first in Bushmills' new "The Rare Casks" series, this expression has spent 11 years in Oloroso sherry casks before being finished in meticulously-sourced ultra-rare Cognac casks for another 17 years.
Notify me when this product is back in stock.

Caskers Rewards Caskers Rewards members earn up to 24 store points back when buying this bottle. Learn more
Out of stock
Skip to the end of the images gallery 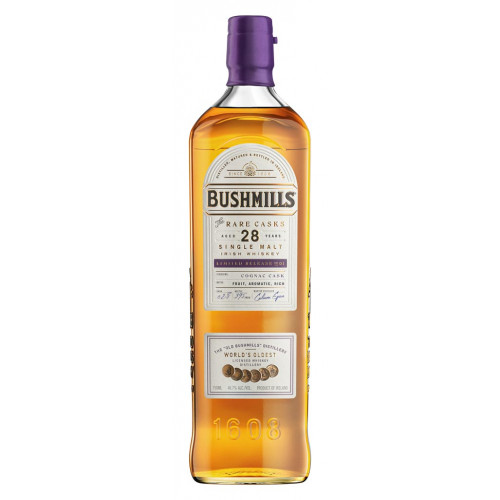 The oldest historical records tell us that whiskey originated along the north coast of Ireland. Whiskey has been made there for over 1,000 years, a craft passed down by generations of Irish inhabitants. Sir Thomas Phillips got his license to distill on those lands in 1608, making it the oldest licensed distillery in the world. A lot of whiskey was produced there — even before the governor of Bushmills, Sir Thomas Phillips, was granted the license to distill there in 1608. After all, Hugh Anderson was doing it in 1784, registering the very first trademark on a pot still.

"Single malt" means that a whiskey has been made at a "single" distillery and uses only "malted" barley in its recipe. Single malt whiskeys are considered the best because of the malted barley. Even centuries ago, malted barley was believed to be the finest grain for making whiskey. Whiskey was only made with barley until the 1800s, when the King of England imposed a tax on it. At that moment, most distilleries switched to corn, a cheaper ingredient, to make their whiskey. Most Irish whiskeys rely only on low-cost corn to make their whiskey to this day. But not Bushmills. Only Bushmills maintained this connection to whiskey’s origin.

A storied distillery steeped in history, Bushmills didn't make it this far by staying the same. Weathering conflict, fire, and famine, Bushmills has emerged from each trial with a newfound strength and commitment to their cause.
Bushmills has always stood its ground in the face of adversary, natural, and economic distaster, rising from the ashes ever stronger.

Today, Bushmills remains an icon of Irish Whiskey. Spearheading Bushmills' new "The Rare Casks" series is the Bushmills 28 Year Old Single Malt Cognac Whiskey, one that takes us on a journey through the illustrious career of Master Blender Helen Mulholland. One of the very first batches she worked on, she has kept a watchful eye over it ever since the spirit was distilled in 1992. Built on their unpeated single malt, this expression was first aged for 11 years in Oloroso sherry casks before being transferred to meticulously-sourced ultra-rare Cognac casks for another 17 years. Complex, rich, deep, and nuanced, this rare Irish whiskey was bottled on July 7th, 2020 at 93.4 proof.

It's a complex, rich, and deep expression with citrus, almond, roasted caramel, prunes, baking spices, and plenty of wood on the nose. The palate continues with dried apricot, orange marmalade, and roasted almonds. Finishes slightly warming with hints of cinnamon and vanilla.