Learn more
Size750mL Proof80 (40% ABV) *Please note that the ABV of this bottle may vary
Aged for 19 years in ex-American bourbon and ex-Spanish sherry casks, this rare Irish whiskey is then married together for an additional two years in madeira-infused casks.

Bushmills has recently changed its designs, and as the original labels are being phased out, there is still a chance that you might receive a bottle different than what is in the picture. Rest assured, the liquid remains the same, regardless of the design. 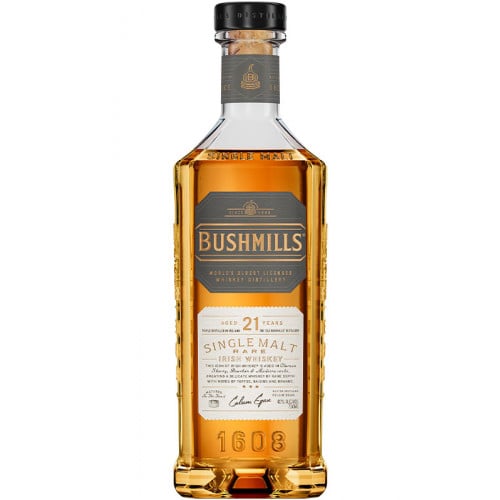 In 1608, King James I of England granted Sir Thomas Phillipps — the governor of Bushmills, County Antrim in Northern Ireland — a license to distill on his territory. Even in those early years, before the Old Bushmills Distillery Company was officially established (Hugh Anderson did so in 1784, and registered the first-ever trademark for the pot still), historical accounts show that a great quantity of whiskey was produced here, and Bushmills is widely-considered to be the oldest distillery in the world. Though several events — including a disastrous fire in 1885, as well as World War II — halted production at the Old Bushmills Distillery, the distillery determinedly fought on, and in 2008, celebrated its 400th anniversary.

Bushmills 21 Year Old Single Malt Irish Whiskey is made with pure, unmalted barley, which is dried in the hot air as opposed to over a peat flame, leading to an absence of the "smoky" character typically found in Scotch whiskies. Once the wort has been fermented, the resulting wash is triple-distilled through copper pot stills — compared to other stills, the stills at the Old Bushmills Distillery are smaller, with relatively slender necks, and those unique characteristics help give the whiskey a lighter, smoother flavor.

Once distilled, Bushmills 21 Year Old Single Malt Irish Whiskey is laid to rest for 19 years in a combination of ex-American bourbon and ex-Spanish sherry barrels, then finally married together for an additional two years in a madeira-infused cask. This intense aging process gives the whiskey an aroma of toffee and dark, bittersweet chocolate. The palate is bursting with raisins, and leads to a long, complex finish marked by mint and fresh licorice.

A very limited number of these casks exist in the Old Bushmills Distillery, and we’ve managed to secure just a handful of bottles.

Aroma of toffee and dark, bittersweet chocolate. Palate is bursting with raisins, and leads to a long, complex finish marked by mint and fresh licorice.