Size750mL Proof108.6 (54.3% ABV)
Distilled in 2009 and bottled in 2019 at 108.6 proof, this expression has spent its decade in predominantly ex-bourbon casks with plenty of barrel-hopping wizardry taking place to craft the complex blend. Mature and peaty, it's Octomore at its finest.

Have a private virtual tasting masterclass with Head Distiller Adam Hannett, the master behind the legendary Bruichladdich series. Register for Bruichladdich’s masterclasses here!
Notify me when this product is back in stock. 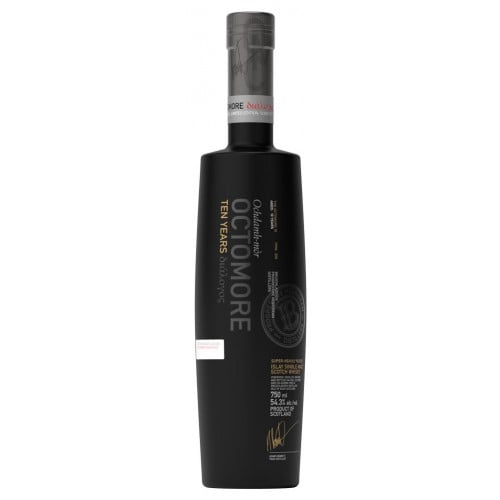 The modern Bruichladdich Distillery is known as the most experimental and adventurous of the Scottish distilleries, and the Bruichladdich Octomore Series represents a singularly unique expression in the world of Scotch whisky. This Octomore Ten Years' age results in a calmer and deeper spirit than the younger counterparts. The 11.1, and 11.3 spirits are more youthful and they focus on the barley influence, while the Ten Years showcases cask influence.

This expression was distilled in 2009 using 100% Scottish optic barley. It was bottled without chill filtration and added coloring in 2019 at 108.6 proof. It has spent its decade in predominantly ex-bourbon casks with plenty of barrel-hopping wizardry taking place to craft the complex blend: virgin oak, first, and second fill casks from Jim Beam, Heaven Hill, Buffalo Trace, and Jack Daniels were used. Limited to 12,000 bottles worldwide, it's a wonderfully mature peaty Octomore that is refined and complex.

Get one of these limited-edition bottles today!

The nose opens with plenty of peat and fruity notes such as citrus, nectarine, and tropical fruit. It's a rich and complex nose with vanilla, oak, and nuttiness as well. There's brine on the palate along with fruit, oak, and smoke. Finishes with the oak stealing the show from the smoke, as well as some coconut, tobacco, and vanilla.