Learn more
Size750mL Proof86 (43% ABV) *Please note that the ABV of this bottle may vary
Brace for the coming of the White Walkers with the whisky of The Night’s Watch. Inspired by Castle Black, this Oban single malt features the official oath for The Night's Watch.
Notify me when this product is back in stock. 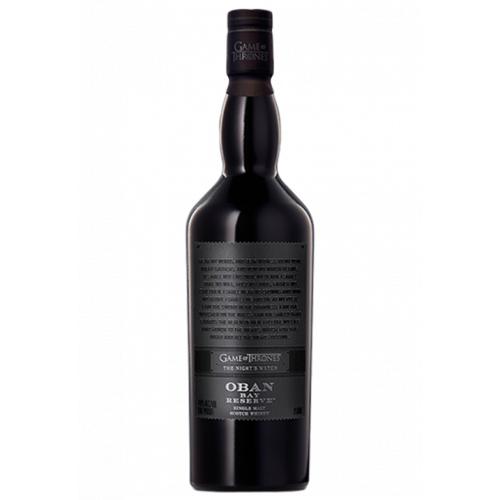 About Game of Thrones The Night's Watch Oban Bay Reserve

Oban single malt whiskies are made using 100% barley, which is malted to the distillery's exact specifications. After the barley is malted, it is partially germinated and gently dried over a peat kiln, giving it a slightly smoky, malty flavor profile. Then, the malted barley is mashed and fermented before being twice-distilled through Oban's lantern-shaped copper-pot stills. The stills are among the smallest in Scotland, and limit Oban's production to just 650,000 liters of whisky annually.

In honor of the final season of the TV series, Game of Thrones, HBO has teamed up with spirits giant DIAGEO to release a limited-edition series of single malt scotch whiskies, inspired by the critically-acclaimed show. Each rare scotch represents one of the iconic Houses of Westeros, including the Night’s Watch. An authentic taste of the Seven Kingdoms, this iconic Game of Thrones collectible whisky is distilled by Oban Distillery.

The Oban distillery sits beneath the steep cliff that overlooks the bay in the frontier between the west Highlands and the Islands of Scotland, separating land and sea, just as Castle Black, home of The Night’s Watch, sits between Westeros and the lands beyond The Wall. The liquid’s richness is balanced with a woody, spicy dryness that The Night’s Watch could enjoy even on the coldest of nights.

Deep, rich notes of cherry pie and candied citrus peel blossom on the palate, drifting into a wonderful crème caramel with just a hint of charred oak.