Be the first to review this product
This release takes Breckenridge's award-winning aged high-rye bourbon for a round of finishing in barrels that used to hold their own rum. The bourbon soaks up the aromas and flavors, reaching another level of complexity.
$60.99
Add to Wish List

After distillation, their bourbon is aged at 120 proof in American white oak casks with a number 3 char for approximately three years and is then brought to proof using pure Rocky Mountain snowmelt from atop Mount Quandry, which has a 14,000-foot peak. "In Breckenridge, we have fresh snowmelt water that’s full of minerals and has its own flavor,” says Bryan Nolt, Breckenridge Distillery’s founder and CEO. "The pH is perfect and the minerals add taste to our spirits just as salt adds flavor to foods," he says.

The taste of Breckenridge Bourbon is certainly turning heads and receiving countless awards. The unusually high rye content gives it depth and complexity. The Bourbon Rum Cask Finish takes that aged bourbon for a round of finishing in barrels that used to hold their own rum — the one that gets several stages of macerations with dried fruit peels, spices, roots, barks, herbs, and spices. Once those barrels are emptied, the bourbon goes inside to soak up all those aromas and flavors, resulting in a complex 90-proof beast. "It may be one of the best products we’ve ever released," says Nolt of this bold new expression.

It's a complex and flavor-packed profile with candied apple, cinnamon, and dark chocolate. Finishes with satisfying lingering allspice. 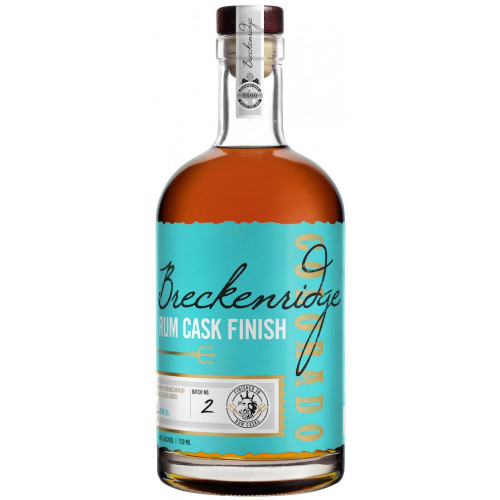