Be the first to review this product
The final limited release in Bowmore’s celebrated Devil’s Casks series, this single malt scotch is aged in Oloroso and Pedro Ximénez sherry casks.
Add to Wish List
Notify me when this product is back in stock.

Founded in 1779 by John Simpson, Bowmore Distillery has stood on the shores of Loch Indaal, a sea loch that opens out into the Atlantic Ocean, for over two centuries. The sea loch slopes steeply as it opens into the ocean, steadily falling from a depth of barely 10 meters to more than 40 meters. As a result of this slope, along with the its unique geography, the loch suffers from tidal streams, eddies and heavy overfalls, making its waters especially hazardous.


Bowmore Devil's Cask III Single Malt Scotch Whisky is the final release in a series that pays tribute to a legend that says the devil once visited a church near the distillery. After the local congregation spotted the devil and chased him away, he fled to Bowmore Distillery. There, warehousemen were filling casks of whisky and loading them aboard a steamer. When the congregation informed the Distillery Manager that the devil was within the gates of the distillery, the Manager ordered an exhaustive search, and sent men to look in every room and crevice that could serve as a hiding location. As legend goes, however, the devil escaped in a cask of Bowmore whisky bound for the Scottish mainland.


Bowmore Devil's Cask III Single Malt Scotch Whisky is made from barley that has been expertly cultivated in the rolling hills of Scotland. Once the barley has been harvested, it is malted and peated at the distillery — Bowmore remains one of the few Scottish distilleries that continues to hand-turn, malt, and peat its own barley. Unlike some other distilleries on Islay, however, the drying process is much shorter at Bowmore — only 15 hours — and utilizes only half as much peat, resulting in a whisky with a robust yet still mild smoky flavor.


After the barley has been malted and peated, it is mashed and fermented with pure water drawn from Laggan River. The water has spent two millennia percolating in the ancient rock formations and peatbogs of Islay, giving Bowmore Whisky its distinctive, chewy body and subtle mouthfeel. Then, the fermented barley is twice distilled through Bowmore's copper-pot stills before being left to mature in the distillery's seaside, underground maturation vaults.


Bowmore Devli's Cask Single Malt Scotch Whisky is matured exclusively (and unusually) in first-fill Oloroso and Pedro Ximénez sherry casks before being bottled at cask strength. The casks contribute a rich mahogany color to the whisky, and provide it with an aroma of corinth raising, salted caramel, malted chocolate, and burnt orange peel. Notes of sea salt, chocolate, light smoke and spices dark fruits, and rich chocolate dominate the palate, and lead to a full-bodied finish accented by notes of coffee and cherries.


Only a limited number of bottles of this single malt whisky are available in the United States. Pick one up today! 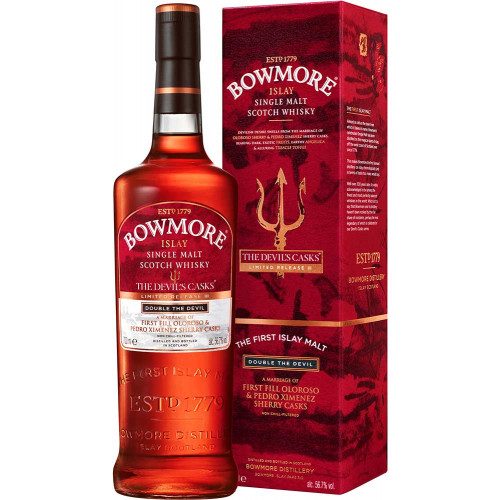