This product is available in: CA, DC, IL, NY, WA Unfortunately, we can't ship to PO Boxes and APO addresses.

Size750mL Proof93 (46.5% ABV)
This bourbon scored three points higher than Pappy Van Winkle's 23YO Bourbon at the Ultimate Spirits Challenge in 2012.
Notify me when this product is back in stock.

This product is available in: CA, DC, IL, NY, WA Unfortunately, we can't ship to PO Boxes and APO addresses. 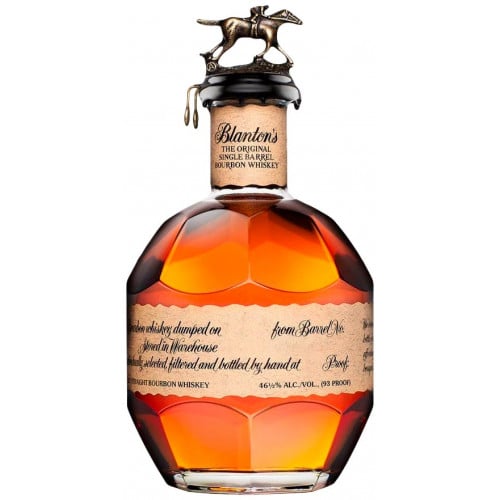 Today, Blanton's Original Single Barrel Bourbon Whiskey is still aged in the same section of Warehouse H as Blanton's Private Reserve was over 50 years ago. In addition, it continues to be bottled from a single barrel that is hand-selected based on its flavor profile.

Blanton's Single Barrel Bourbon has a nose of apple and cinnamon, with hints of vanilla and caramel. The initial flavor profile is sweet, with notes of peaches, pears and dried apricots. The flavors fade to a touch of cinnamon and baking spices and finish with notes of maple syrup and molasses.

Pick up one of the best bourbons today!

Much like his mentor, E.H. Taylor, Blanton was a traditional bourbon aristocrat, wedded to the production of Kentucky straight bourbon whiskey. Blanton identified a certain section of Warehouse H at his distillery, which he believed was the best for aging bourbon, and would personally select individual barrels from the section to bottle for his own private reserve.
Explore all Blanton's bottles >>

Nose of apple and cinnamon, with hints of vanilla and caramel. Initial flavor profile is sweet, with notes of peaches, pears and dried apricots. Flavors fade to a touch of cinnamon and baking spices and finish with notes of maple syrup and molasses.

4.8 out of 5
(11 reviews)
Write a review
Real email address is required to social networks
Sign in
Login with Google
Login with Facebook
Or
We also recommend