Learn more
Size750mL Proof92 (46% ABV) *Please note that the ABV of this bottle may vary
This rare, single barrel, small batch Bourbon is crafted from a mash of 70% corn, 26% rye, and 4% malted barley.
Notify me when this product is back in stock. 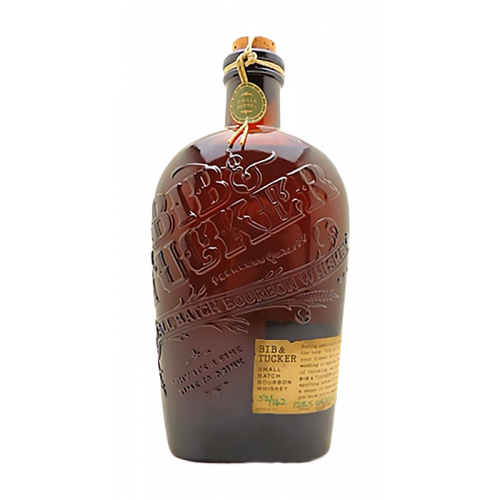 Bib & Tucker Small Batch Bourbon Whiskey is crafted from a mash of 70% corn, 26% rye and 4% malted barley. The grains, which were harvested in late 2006 and early 2007, were distilled twice - first through a column still and then through an old-fashioned copper pot still. Following distillation, this Bourbon is matured in No. 1 charred American white oak barrels.

Bib & Tucker’s award-winning small-batch bourbon has been released in seven and ten-year-old cask-strength expressions. Released by 3 Badge Beverage Corp. Mixology division as a part of their barrel program, Bib & Tucker is now owned by Connecticut-based Deutsch Family Wine & Spirits. “Each barrel is a little different, with exciting nuances and complexities that connoisseurs of fine bourbon will appreciate…” says August Sebastiani, president of 3 Badge Beverage Corporation.

The barrels were chosen from a variety of different casks before being selected for bottling. Each bottle is hand-labeled in a distinctive packaging identifying the bottle number, proof, alcohol, barrel number and number of years aged. Bib & Tucker Bourbons are characterized by distinct aromas of vanilla, freshly mowed grass, and leather-bound books. The palate is dominated by sweet notes of fruit, vanilla, and a subtle touch of ginger spice. The finish is complex and lingers, with hints of chestnuts and roasted corn. Aged for ten years this bourbon is bottled at 128 Proof.

In the antebellum United States, the term "bib & tucker" was used to describe the finest attire a man owned — the kind of suit or tuxedo that he would wear to a wedding or special event. "Along those lines, we're putting forth our bib & tucker," says Harv Gates, the brand ambassador of 35 Maple Street Spirits. "Bib & Tucker is a handcrafted bourbon made with a sense of dedication that can only come when you know you're making something truly special."
Explore all Bib & Tucker bottles >>

Aromas of vanilla, freshly mowed grass and leather-bound books on the nose. Notes of sweet fruit, vanilla beans, caramel and dried apricots dominate the palate and complemented by a subtle touch of ginger spice. The finish is complex and lingers, with hints of chestnuts and roasted corn.