Size750mL Proof92 (46% ABV)
A blend of 10-12 year old single malts, this whisky earned a score of 95.5 points from Jim Murray's Whisky Bible.
Notify me when this product is back in stock. 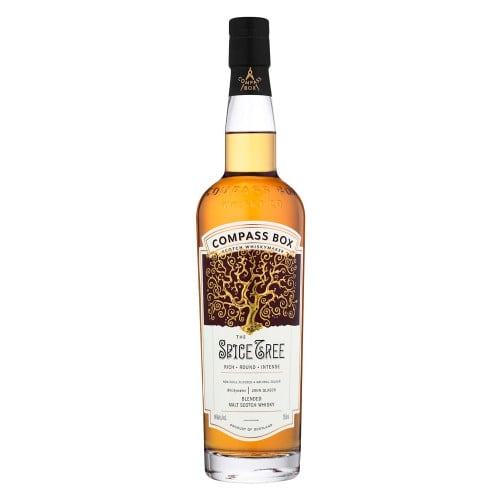 First launched in 2005, Compass Box Whisky Co.'s Spice Tree Blended Malt Scotch Whisky was discontinued in 2006 as a result of a legal threat by the Scotch Whisky Association (SWA). "The issue revolved around the SWA's interpretation of the law regarding traditional practices"in the production of Scotch, says John Glaser, the founder of Compass Box. Glaser was using French Sessile oak stave inserts in order to enhance the flavor of his aging whisky. "Alas, the SWA heard about what we were doing and decided they needed to stop us. They suggested that our technique of using high quality oak wasn't appropriate for making Scotch and threatened to take us to court." Glaser suspended production of Spice Tree Whisky for four years, during which he worked with woodsman in France and coopers in Scotland to produce a new type of cask that would do justice to the original Spice Tree Whisky he produced.

Today, Spice Tree Blended Malt Scotch Whisky is a blend of 10 — 12 year old single malt Scotch whiskies sourced from distilleries situated in the northern Highlands region of Scotland (primarily Clynelish, Dailuaine, Longmorn, and Teaninich). After sourcing the whisky, Glaser blends the single malts together and then ages the blend for an additional two years in custom-made first-fill bourbon hogsheads casks.

Rather than use the flat stave inserts that got him in trouble earlier, Glaser worked with an oak supplier in France and a cooper in Scotland to develop a method for creating heavily toasted cask heads which impart a flavor profile similar to the flat staves used for the original Spice Tree bottlings. "The cask heads have three different levels of toasting," says Glaser, "allowing us to blend the resultant whiskies to create additional layers of complexity." After aging the blend for an additional two years, each batch of Compass Box Spice Tree Whisky is brought to proof and bottled.

Spice Tree Blended Malt Scotch Whisky has an aroma of ginger, cinnamon and clove, which give way to bold notes of vanilla, malt, and brown sugar, along with a hint of dried fruits. The finish, which is long and satisfying, is well-balanced between sweet notes of vanilla and spicy notes of cinnamon and allspice.