Learn more
Size750mL Proof80 (40% ABV) *Please note that the ABV of this bottle may vary
Johnnie Walker Black Label is the popular brand's 12-year expression, created using whiskies aged for a minimum of 12 years from the four corners of Scotland. This iconic whisky is one it is one of the world's best-selling Scotch whiskies, and one of whisky critic Jim Murray's favorite blends. 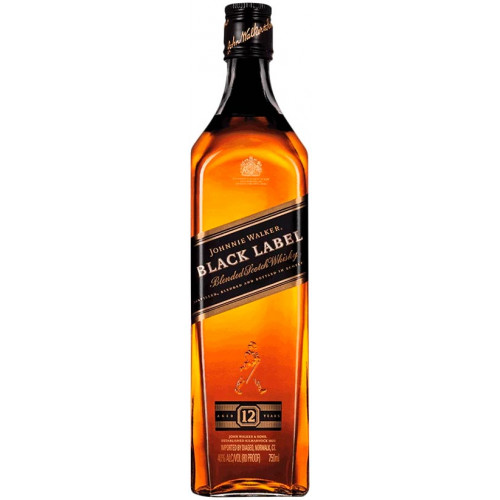 Johnnie Walker, one of the most widely distributed brands of blended Scotch whisky in the world, originated in the Scottish burgh of Kilmarnock in East Ayrshire. The story of the brand starts with John Walker, who started a profitable groceries business with the inheritance from his father. John Walker, himself a teetotaler, found his competitive edge in whiskies he blended himself, offering his customers a consistent product, unlike most other grocers, who usually sold a line of single malts that were never all that consistent. Whisky represented about eight percent of the sales when John’s son Alexander Walker took over the business after his father’s death in 1857, and when the company was passed on to the third generation, this share was already between 90 and 95 percent.

The legalization of the blending of grain and malt whiskies by the Spirits Act of 1860 marked the beginning of the modern blended Scotch whisky. Johnnie Walker's first commercial blend, called Old Highland Whisky, was launched in 1867. Alexander Walker also introduced the brand's signature square bottle, and the distinctive slanted label. In 1893, the Walkers acquired the Cardhu distillery, and kept expanding through the early 20th century by buying interests in a number of distilleries, and the Mortlach distillery in 1923. This ensured the company a steady supply of whiskies for its blends. By 1909, John's grandsons George and Alexander II had expanded the line, and sold three blended whiskies, 5-year old Old Highland, 9-year old Special Old Highland, and 12-year old Extra Special Old Highland, which carried white, red, and black labels, respectively.

In 1909, the company rebranded its whiskies, introducing the famous striding man logo and renaming the blends after the colors of their labels. They also made Johnnie Walker White a 6 year old, and Johnnies Walker Red a 10 year old. By 1920, Johnnie Walker could be bought in 120 countries. The company joined Distillers Company in 1925, and, after its acquisition by Guinness, and Guinness’s subsequent merger with Grand Metropolitan, the brand is now owned by Diageo. Diageo, a British multinational beverage alcohol company, operates in more than 180 countries and produces in more than 140 sites around the world, which however no longer include the plant in Johnnie Walker’s place of origin, Kilmarnock, which was closed down in 2012.

Black Label, the brand's 12-year expression, is one of the world's best-selling Scotch whiskies. It is created using around 40 single malt and grain whiskies aged for a minimum of 12 years from the four corners of Scotland.

The nose is luxurious, with rich and tropical dark fruits, and hints of sweet vanilla. The palate has depth coming from the maturation in oak casks, and creamy toffee notes that come from grain whiskies. The finish is smooth and smoky, as you would expect from a Johnnie Walker.