Caskers Rewards members earn up to 2 store points back when buying this bottle.
Size750mL Proof86 (43% ABV)
This Balblair 10-year is a single malt expression bottled by Gordon and Macphail, from their ‘Macphail’s Collection.’ This light Highland dram is aged in refill bourbon barrels.
Notify me when this product is back in stock. 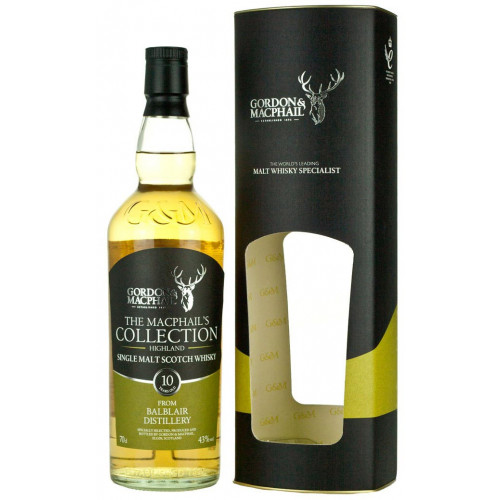 Situated in the Highlands region of Scotland, the Balblair Distillery was founded in 1790 by John Ross. For over a century, Ross and his son, Andrew, shepherded the distillery forward. In 1895, however, the distillery was purchased by Alexander Cowan, an Inverness wine merchant, and relocated to be closer to the Edderton Railway Station (at the time, coal and barley arrived at the distillery via rail). Nevertheless, Cowan was so impressed by the distillery's original water source (the Ault Dearg burn) that he chose to ignore a nearby burn in favor of the water that the Ross family had been using for over a hundred years. Today, the Balblair Distillery continues to source its water from the Ault Dearg burn.

Balblair Single Malt Scotch Whisky is made from plump, ripe Scottish barley, which is malted and fermented using water from the same source the Ross Family began using nearly 225 years ago. Following fermentation, the grains are twice distilled through the Balblair's copper-pot stills. After distillation, Balblair's still men remove the heads and tails of the distillate and preserve only the "hearts" for maturation (the hearts comprise less than 20% of the entire distillate).

This single malt 10 Year Old Balblair is bottled by Gordon & Macphail, a family owned independent bottler and distiller of Scotch Whisky, founded in 1895 in Speyside. This expression is from their ‘Macphail’s Colection,’ a small and exclusive range of fine single malt scotch whiskies from distilleries throughout Scotland. Aged in refill bourbon barrels, and bottled at 43% ABV, this light Highland dram is flush with notes of fresh cut grass, citrus, and roasted nutty flavors.

Pick up a bottle of this special Highland whisky today!

On the nose fresh cut grass, pear, and lime aromas mingle with toasted malt and subtle nutmeg. The palate is peppery but creamy, with flavors of milk chocolate, orange zest, roasted hazelnut, and a peppermint edge. The finish is medium in length, with fresh fruit and delicate briny accents.